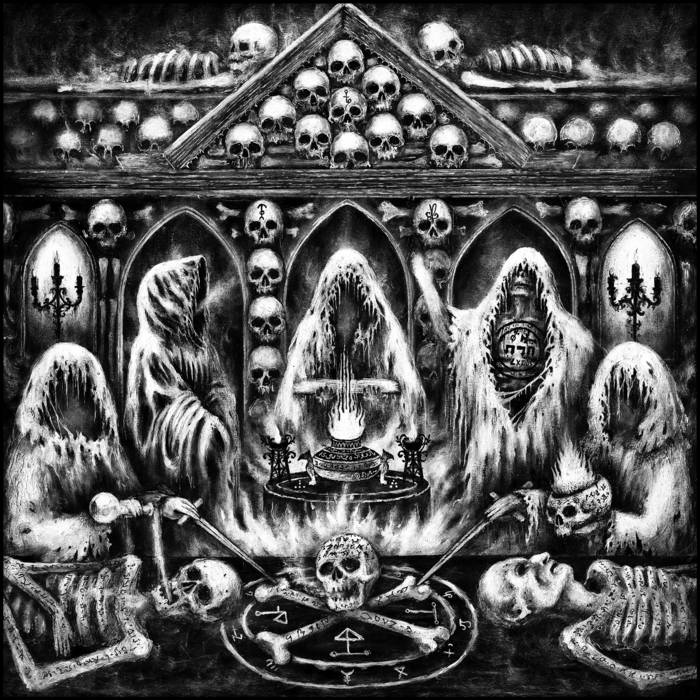 Harvest Gulgaltha first revealed its unique form of “cryptic necromantic black death metal” with its 2012 demo, “I.” The simplicity of this title perfectly reflects the stark austerity of Harvest Gulgatha’s music, which filters out the more ornamental features of black/death metal and distills the essential qualities of the subgenre into its most primordial base, leaving no frills to distract from its lethal potency. Originally self-released as a very limited cassette under the band’s Aphotic Sonance label, “I” was later discovered and released by Nuclear War Now! on 12-inch vinyl format in 2014, with the agreement that Harvest Gulgaltha and NWN! would soon partner to release the band’s debut album. A little over two years later, this prophecy is now fulfilled with this offering of “Altars of Devotion,” an eight-song, thirty-eight-minute aural manifestation of ceremonial corporeal necromantic workings. “Altars…” seeks not to deviate substantially from the blueprint laid by Harvest Gulgatha’s earlier works, but rather succeeds in its singular goal of capturing an aura of suffocating obscurity. Thus there are no guitar leads or technical scale wankery, nor are there overly-complex song structures or cataclysmic changes in tempo to satisfy the most impatient listeners. Instead, these meditations thrive on a continual dose of mid-tempo, lumbering death metal that inhabits a limited but effectively dark tonal range, accentuated by the relentlessly constant pace of the prominent kick drum and bludgeoning bass. Occasionally the guitar riffs and vocals seem to yearn to drift out of the quagmire firmly established by the bass and drums, only to be quickly captured and returned to their rightful place in the subsonic abyss. As such, this recording was condemned to languish in the sub-stratospheres of death, the ultimate condition of life, from which the notion of escape ceases to exist. This inevitable truth is magnified in the voluminous production, a product of the band’s strict adherence to recording in the familiarly moribund confines of its own Aphotic Sonance Studios. “Altars of Devotion” hereby presents a primitive vision of a fate that relentlessly awaits even the most dedicated attempts to thwart it.