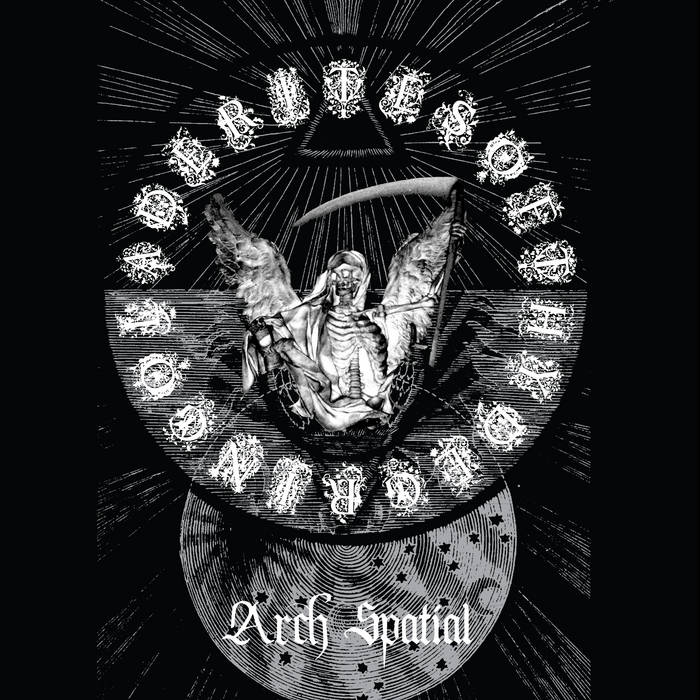 On the eve of the release of Rites of thy Degringolade’s fourth album and its first since 2005, Nuclear War Now! is proud to offer “Arch Spatial,” a collection of some of the band’s early recordings. Including all tracks from the original, self-titled demo and the “Totality’s Kommand” EP, this compilation also features one previously-unreleased song, which serves as the opening track and gives the compendium its name. Originally conceived and recorded during the band’s third recording session, this title track was at first intended for inclusion on a separate compilation album that never came to fruition. Thus condemned to dormancy until now, and perhaps suitably so, it stands as a testament to the evolution that the band underwent in transition from previous recordings, in which Paulus performed all instruments and vocals, to the ensuing period in which Wroth was enlisted as a second member. The following three tracks were recorded two years later for the 7” EP, “Totality’s Kommand,” which was originally released by the now-defunct Australian label, Decius Productions, in 2003. While remaining steadfast in its trademark whirlwind execution, these songs also marked a slight change in direction for the band. The short, simple title track of this EP has remained a constant staple in live performances ever since it was first committed to wax fourteen years ago. The four tracks that follow and close this collection are an entirely different entity in the Rites of thy Degringolade catalog. Moving backwards in time to the band’s birth, these songs were originally released as a demo by Paulus on cassette format in somewhat limited quantities in 1999. Having left all of his prior projects by this point, all instruments and vocals were handled by Paulus himself, a practice which allowed him to express his own unfettered, singular vision. These early demo tracks encompass the signature attack of what would remain a constant in later output, while at the same time they are injected with elements of experimentation, doom, and even touches of crushing ambient sound.

As with all parts, as with all things... May this compilation serve as a vessel into the past and make way for over a decade of silence to be cut wide open by the Blade of self will, in the form of a brand-new, full-length album to be released in conspiracy with the unstoppable force, Nuclear War Now! Productions, later in 2017.