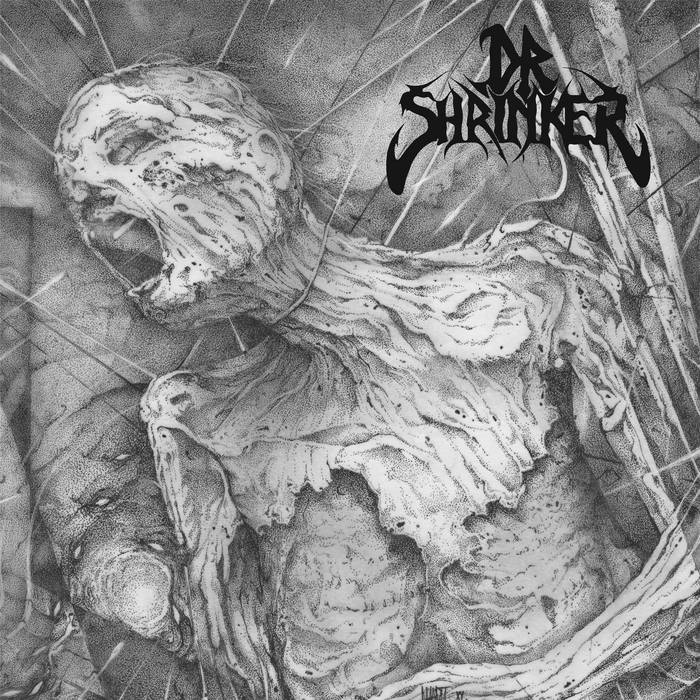 As a product of the Milwaukee, Wisconsin metal scene of the mid 1980s, Dr. Shrinker largely toiled in obscurity throughout its early years. Unlike many death metal bands in the Tampa, Florida area of roughly the same period, for example, Dr. Shrinker did not benefit from being involved in a burgeoning scene that attracted significant attention. Thus, as it happens so often, the genius of this group of musicians was not fully recognized until years after the band’s dissolution. Originally formed in 1986, Dr. Shrinker underwent a few lineup changes and recorded four full demos and an additional single demo track during its short-lived initial existence between 1988 and 1990. In spite of these recordings and its active presence in the local DIY metal scene, the band never toured or attracted an album deal from a label that actually materialized. That said, Dr. Shrinker has since earned the recognition that it has rightfully deserved as one of the most grotesque U.S. death metal bands to have ever existed. Among other renowned metal and hardcore bands, Shrinker’s music was heavily influenced by Autopsy, and the respect was mutual. In fact, Chris Reifert was one of the band’s most ardent and prolific supporters, as he was active in spreading the band’s early demos. Nonetheless, the band dissolved in 1990 and took a twenty-five-year hiatus, in part due to the frustration with being unable to secure a record deal.

It is with great pride that Nuclear War Now! has exhumed the remains of Dr. Shrinker’s first era with two double-LP collections simply titled “Archive I” and “Archive II.” The first of these compilations includes the “Recognition” demo and “Live Demo” from 1988, as well as a rehearsal from 1990. The second includes the “Wedding the Grotesque” demo from 1989, the “Eponym” demo from 1990, and a single track, “Our Necropsy,” that was recorded in 1990 as a demo for what was intended to be the first Dr. Shrinker album that never came to fruition. Additionally, the die-hard version of this release includes both compilations along with a 32-page zine-style booklet that boasts the most extensive Dr. Shrinker biography known to exist as well as numerous photos and flyers from the band’s initial period of existence. Given the attention to detail that NWN! is known to exercise, it goes without saying that this is the most fitting way to pay tribute to a band that deserved such treatment over two and half decades ago.