Blood Upon the Altar 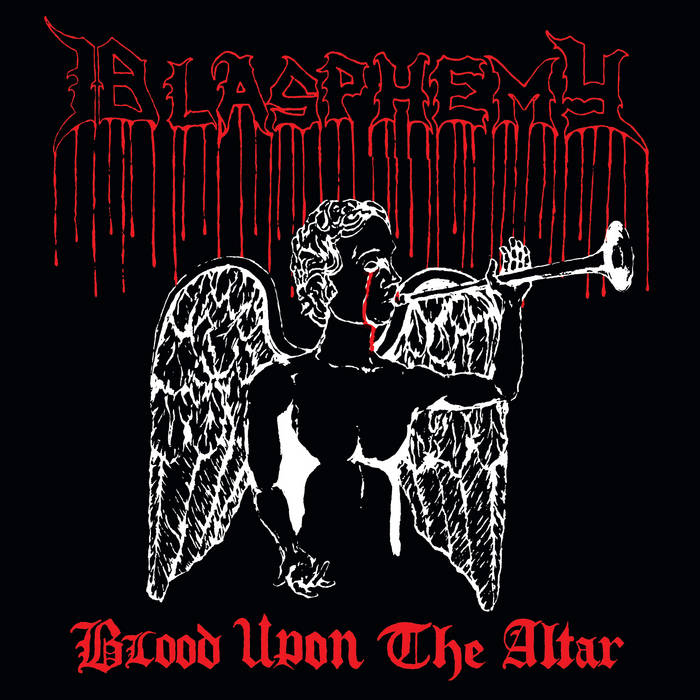 pornhubby where it all started, lurching out of the gate. purulent, putrescent, just completely fuckin excoriating, it still sounds urgent and vital. like metal? you need this. don't like metal? boy do i have the album for you. thrash it on tape so it sounds even worse. brilliant. Favorite track: Demoniac.

Kalen Baker One of the best raw, brutal black metal releases of all time. Fallen Angel of Doom is a masterpiece and I love this demo even more

Although Blasphemy’s recorded output was limited, its endurance over the last three decades is a testament to its originality and extremity, and it all began with the Blood Upon the Altar demo. The band’s origin was unremarkable but auspicious. In 1984, founding members Nocturnal Grave Desecrater and Black Winds and 3 Black Hearts of Damnation and Impurity, who lived near one another and were already acquainted, began playing music together, mostly working on cover songs. They soon recruited Caller of the Storms and Black Priest of the 7 Satanic Blood Rituals to complete the original lineup. After briefly adopting the name Antichrist, the band eventually settled on the simple and iconic name Blasphemy and began writing songs. They refined their sound and focused their songs during live rituals over the next several years, although the lineup would fluctuate slightly when Black Winds did a brief stint in jail, and Bestial Savior of the Undead Legions briefly assumed bass duties. Black Winds soon rejoined the fold, and Blasphemy entered Fiasco Bros. studio in 1989 with an $800 budget. They emerged having produced one of the most devastating demo recordings ever made. Blood Upon the Altar ushered in a new style of Black Metal, no less dark or evil than their contemporaries, but more confrontational, more violent. In addition to being heavily inspired by Bathory, Sodom, and Slayer, Blasphemy also drew from the punk infused Brazilian scene, especially Sarcófago, as well as Grindcore bands like Blood and Genocide (Repulsion). The resultant mixture of these influences yielded a demo that established a new standard for extremity in Black Metal, a bar that Blasphemy would continue to raise with each subsequent recording. This edition of Blood Upon the Altar marks the first time since its original release that it has been properly featured as a stand-alone album. For far too long, this demo was tacked as bonus tracks onto the end of the Gods of War album, leaving the impression that Blood Upon the Altar was of lower stature; in fact, for many, Blood Upon the Altar is the most powerful Blasphemy release of all. Additionally, many of the earlier reissue editions of this recording had long gaps between the tracks owing to an improperly prepared digital master, but that flaw has been corrected with this version, which was also remastered by James Plotkin to ensure the best possible sound. Finally, the original demo artwork once again adorns the cover of this LP, which also features a full-color gatefold. In every respect, this version—a joint release by NWN! and Ross Bay Cult—seeks to restore Blood Upon the Altar to its original status as one of the most significant Black Metal recordings of all time.