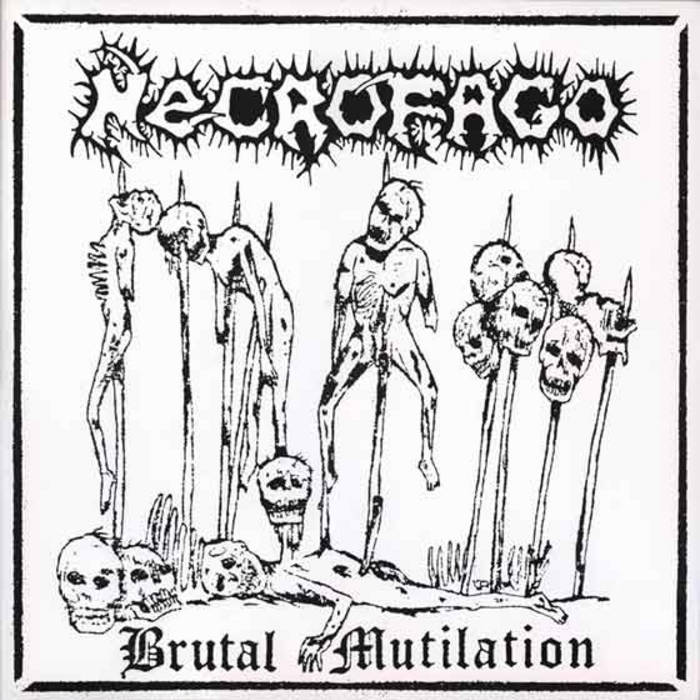 In the late 1980's and early 1990's, Brazil was like a Petri dish upon which grew, with bacterial rapidity, a particularly virulent strain of Deathrash that ushered in the first manifestations of South American Black Metal. In the early to mid-1980’s bands like Vulcano, Sarcofago, and Sepultura began to define a sound that has come to be distinctly associated with Brazil. Within the span of just a few years, a nucleus of bands playing this style quickly emerged, with each providing a variant on the bestial and primitive sound at the core of the Brazilian underground. As this rotten music festered in the sick corners of Brazil, it began to draw the attention of the international underground as bands such as Holocausto, Sextrash, Insulter, Chakal, and others unleashed their own warfare noise and a scene began to coalesce around them. In 1987, a dark entity known as Necrofago was summoned into existence via the ominous incantations of vocalist/guitarist Deathvomit in association with Rotten on bass, Rotten Corpse on drums, and later joined by Post Mortem on guitar. Not to be confused with various other bands of the same name, this band came from Minas Gerais, Brazil. (Most notably, the Necrofago from Sau Paulo responsible for the “Desire for Blood” demo is often, despite the obvious sonic differences, mistakenly associated with the one from Minas Gerais.) The entirety of Necrofago’s recorded legacy is encapsulated in their activities during the years 1897 and 1988 with the most important piece being their 1987 demo entitled “Brutal Mutilation.” One of the most unique sounding recordings to have come from the Brazilian scene, “Brutal Mutilation” exemplifies, unlike any other recording, the emphasis those bands placed upon harsh aggression and raw recording techniques. The demo sounds like the result of the potent collision of immense quantities cheap alcohol and inhalants in brains already awash in adrenaline and youthful testosterone. Lacking in nearly every category of technical proficiency, Necrofago focused their entire effort into creating a monument to savagery. While the apparent ineptness of the playing may initially be off-putting to some listeners, those capable of suspending their need to generate order out of the chaos of the recording will find some of the most truly evil tracks committed to tape in the 1980’s. Even at the time of its release, the demo was well-received and found its way into the hands of some of the more legendary figures in the underground. When asked about Necrofago, Laruent Remadier of Decibel of Death Zine/Snakepit Magazine responded with the following: "Oh man! I recall Necrofago. I recall being in Morbid Angel house back in '87 and having David mentioning them non-stop like Sarcofago." The guitars on the demo are brittle and sordid and rest uneasily atop the drums. The entire cacophonous mixture teeters on the brink of total collapse throughout each of the three tracks as the repetitious riffs, at times almost hypnotic, roil and churn. Deathvomit’s menacing vocals fill out the sound and add to the grotesque character of the music. Aside from the “Brutal Mutilation” demo, only a 1988 rehearsal demo and live recording from the same year exist to affirm the existence of Necrofago. These recordings are more obscure and ridden with even more impenetrable sound quality. Nonetheless, the vitriolic and intense nature of the playing is captivating. Although these tracks have been bootlegged several times throughout the years, the band’s existence is still often overlooked, and, yet, their influence in the Brazilian scene was immense. This vinyl release marks the first time that these recordings have been officially reissued and will allow new legions to breathe in the foul death-odor emitted by Necrofago.