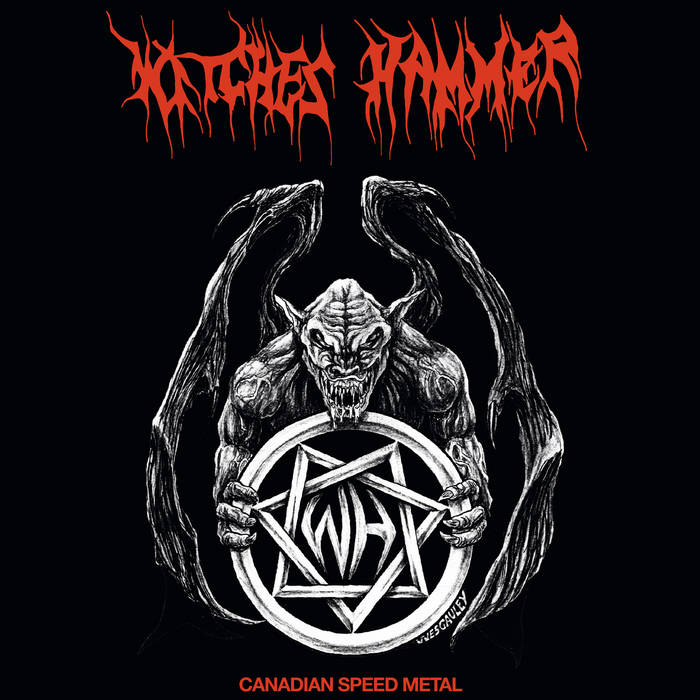 As a product of the storied extreme metal scene of British Columbia, Witches Hammer predated other bands from the area who later attained greater recognition and notoriety. Regardless of its more obscure status, this evil speed metal outfit laid the foundation upon which the infamous Ross Bay Cult would be built. The most likely reason for the band’s relatively low exposure is the fact that it never officially released a full-length album. That said, its recorded material demonstrates once again that the number of albums released is not the standard by which a band’s greatness can be measured. Formed in 1982 by a thirteen-year-old Marco Banco (guitars) and Alan Goddard (bass) under the original moniker of Oblivion, Witches Hammer was in fact the first extreme metal band to emerge from the Vancouver area. Approximately one year later, these two were joined by Ray Prizmic (aka Ray Crude) on vocals, and his brother, John, on drums. Several lineup changes occurred in the early years, but two core members, Marco and John, persevered throughout in writing and rehearsing songs. As the lineup stabilized, the band started to gain a reputation in the area as a result of its live performances at gigs shared with mostly punk and hardcore bands, due to the lack of extreme metal bands in the area.

In 1985, Witches Hammer recorded its first, self-titled demo at the famed Fiasco Bros. Studio in New Westminster, BC with the lineup of Ray Prizmic (vocals), Marco Banco (guitars), John Prizmic (drums), and Steve Withrow (bass). Although Fiasco Bros. is more widely known as the site of Blasphemy’s most legendary recordings, Witches Hammer was the first extreme metal band to utilize the studio. This trailblazing demo opened with what is perhaps the band’s most recognizable track, “Thulsa Doom,” which was inspired by Robert E. Howard’s “Conan” saga of books and movies. This song became a live staple and was later re-recorded on two separate occasions. Also included was the only studio recording of the song “Witches Hammer,” which was given the title before the band itself had even assumed it. The following year, the band returned to the very same studio to record a second demo simply titled “Demo 87” in reference to the year of its release. “Demo 87” included five new tracks in addition to a re-recording of “Gorgon,” which also originally appeared on the first demo. This second recording also featured more complex songwriting, clearer production, and improved instrumentation in comparison to the first.

As it first did in 2003, Nuclear War Now! is proud to present both of these demos in a single LP compilation entitled “Canadian Speed Metal.” The timing of this repress is appropriate given the fact that Witches Hammer is set to play its first live show outside of Canada in November at the Never Surrender Fest in Berlin, Germany. This release and Witches Hammer’s impending debut performance on foreign soil are certain to recall overdue attention to the band that set the course for a scene that is now immortalized in extreme metal history.