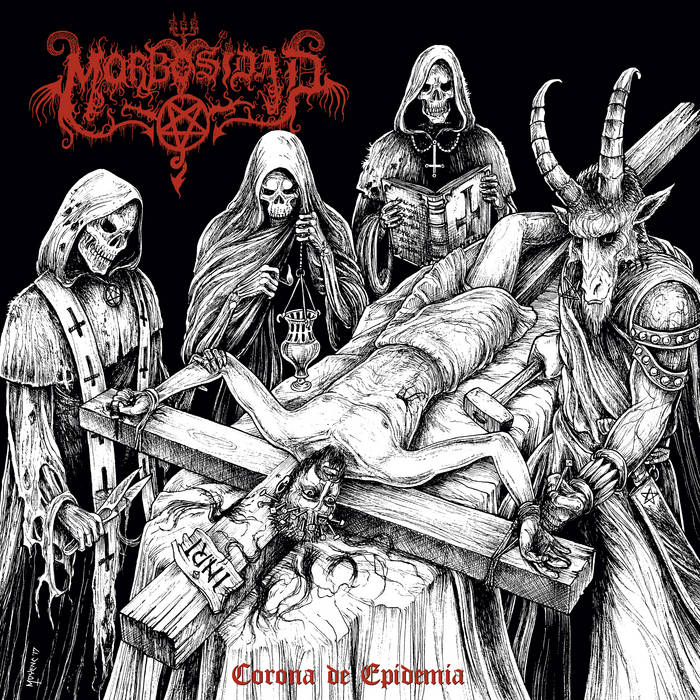 For twenty-five years, Morbosidad has been a stoic pillar in the black/death metal underground. Guided by the relentless dedication of demonic mastermind and vocalist, Tomas Stench, the band has maintained a level of consistency in its recordings and live performances that has not been rivaled by many over the course of such an extended tenure. Even more impressively, it has achieved this feat in the face of numerous lineup changes, including those resulting from the untimely deaths of two drummers and an ensuing three-year hiatus following the first of these tragic setbacks. Throughout Morbosidad’s history, Nuclear War Now! has supported its nefarious cause by releasing all of the band’s full-length albums on vinyl, CD, or both, along with two EPs and a split EP. In fact, the seminal self-titled debut album was one of the very first that the label released, and it has been repressed a number of times, including in the limited “Onward//Ascendant” series of picture discs that NWN! made available in part to commemorate the most long-standing partnerships it has had with a select number of bands on its extensive roster. This conspiracy continues anew with the release of “Corona de Epidemia,” the fifth album in Morbosidad’s unyielding discography and one which reaffirms the band’s revered status. Unlike many highly-respected bands who release an acclaimed masterpiece along with an additional solid album or two before fading into the obscurity of forgettable later recordings, “Corona de Epidemia” maintains the same degree of songwriting, musicianship, and overall hostility that have characterized Morbosidad’s previous recordings. The most unmistakable constant between this album and the others is Stench’s signature vitriolic vocal assault, which is as potent as ever. As always, his lyrics are written in Spanish, which is an appropriate vehicle for his venomous blasphemies, given the language’s history as a direct descendent of the Latin tongue spoken by the crucifiers of Jesus Christ. Joining him on this album is a lineup once again partially revamped since the “Tortura” EP, which is comprised of Joe Necro (guitars/bass), Matt Mayhem (drums), and Ded Ted (bass). Like “Tortura,” this album was recorded by Irving Lopez at Imperial Mind Engineering in Dallas, Texas. The result is a production that, much like “Tortura,” is deeper and fuller than that of the preceding album, “Muerte de Cristo en Golgota,” and thus enhances the violent delivery of the vocals and drums in particular. Continuing a practice also established on the “Tortura” EP, on which the infamous Chris Reifert of Autopsy joined the band for guest vocals on the final track, Sodomatic Slaughter of Beherit was invited to record the drums on the closing track of “Corona de Epidemia.” These appearances by such honored guests are a testament to the respect that Morbosidad has earned from its peers and fans alike. Originally released jointly by NWN! and Boris Records as a limited-edition LP with alternate cover to celebrate the band’s performance at the Mass Destruction Metal Fest in Atlanta in November of 2017, “Corona de Epidemia” is hereby released with a more comprehensive layout featuring yet another work of art from Chris Moyen, who has served as the illustrator-in-chief for many of the band’s recorded works and has once again perfectly captured in image the band’s doctrine of contempt for the Bastard Son and his meager flock.