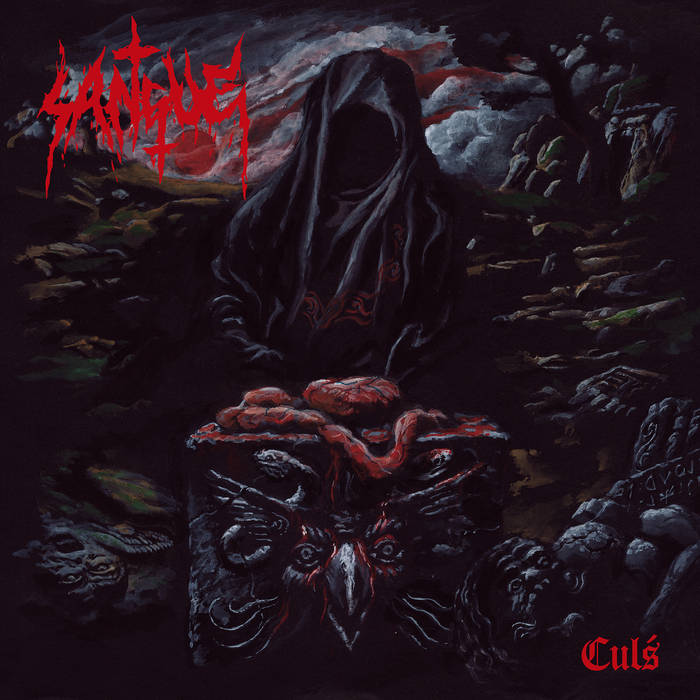 In service to the deities of ancient Etruria, Nuclear War Now! hereby summons the first complete work of Sangue, “Culś.” Although the band first officially revealed itself only two years ago, Sangue draws its lifeblood from the Etruscan forefathers that inhabited its homeland of current-day Italy approximately three millennia ago. By extension, Sangue’s aural manifestations of pagan darkness pay homage to the ancient rites of a civilization whose denizens sought the favor of gods who wreaked havoc by meddling in earthly affairs. Thus, it is only fitting that this cult’s creations resemble a maelstrom of death that threatens those who bear witness. With its 2017 self-titled EP, Sangue unfurled its first two hymns as a sampling of what was to come on this album. One of these tracks, “The Rite of Cosmic Void,” has been re-recorded for inclusion on this full-length. This latter version demonstrates the most significant improvement over the earlier EP, a recording already quite solid itself, in that it is enhanced by a quality of production that is better suited to this style of death metal. The album’s production is much more voluminous and cavernous, and it thereby evokes an increased sense of bleak grandeur. Unlike the original version of the “The Rite…” as it was recorded for the EP, instruments are not lost or inextricably blended together, but instead each maintains its own definition, which is particularly remarkable given that this is a five-piece band. It would be remiss not to mention the essential role of the mix and mastering work by The Devil’s Mark Studio in achieving this sound, which is perhaps not surprising when one considers that this studio is run by a compatriot of Sangue from Demonomancy, a band who clearly understands how to properly attain a sound of this type. The riffs churned out and the leads exercised by the dual guitars of "Yama tattoo" Welt and Valerio Scissor are cemented to the varying tempos by Meta’s bass lines, all of which is driven forward by the percussive onslaughts of Alex Wank, best known for having cut his teeth in the early nineties with Austria’s infamous Pungent Stench. Meanwhile, Offender’s ominous voice reverberates throughout and permeates the massive atmosphere established by the other instruments. The entire work is prefaced by an intro composed and performed by none other than Claudio Simonetti, renowned member of progressive rock band Goblin and specialist in horror movie scores. Finally, the pedigree of the musicians and producers is equaled by that of the visual art that accompanies the release. Timo Ketola was invoked to contribute yet another grim masterpiece for the cover, and poster art was provided by Enzo Sciotti, famous for the horror art he has created since the 1980s for films such as The Evil Dead and Army of Darkness. Indeed, the final product is one that would be sure to please the malevolent gods of Etruria, perhaps even temporarily sparing its doomed citizens from their eventual fate.