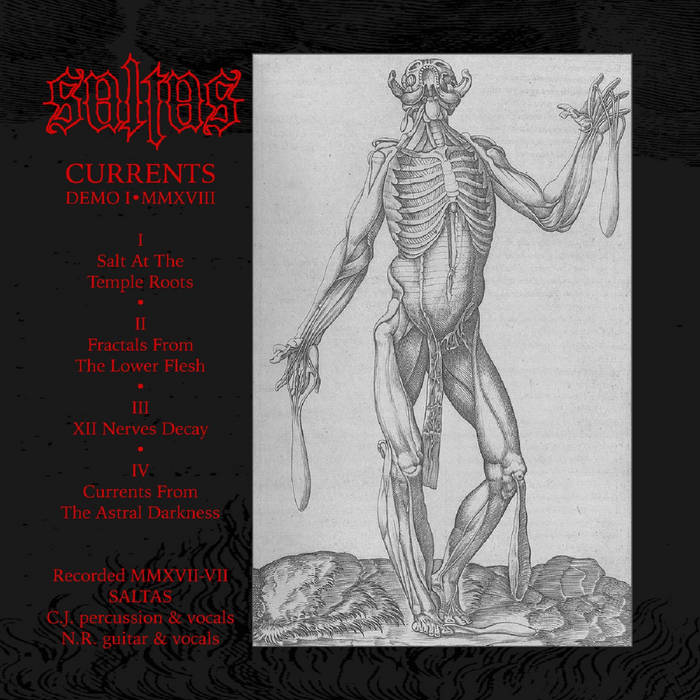 Death metal has always been predicated upon the acknowledgement and even celebration of the final outcome of life. While many varieties of the artform have undertaken this task by bludgeoning their subjects with relentless onslaughts of aural violence, the subgenre of doom death is most potent as a reflection of the manner in which most face their ultimate expiration – through a progression of increasing dormancy that is less violent than it is insidious. Conceived in Gothenburg, Sweden in 2017, Saltas embraces this latter formula of obscure, slow death through the restrained minimalism of its music and lyrics. As the fruit of a collaboration between two individuals, C.J. (drums, percussion and vocals) and N.R. (guitar and vocals), Saltas has begun its development from the same lineage as other similar entities in which its members have toiled over the past several years, perhaps most notably in Irkallian Oracle and The Funeral Orchestra. However, this is the first instance in which the two have worked together in the same constellation. Under a shared vision of creating something dark, heavy, and minimal, songs and lyrics were written relatively quickly and the first four songs were recorded under simple conditions. The result is the band’s first demo cassette, “Currents,” which is hereby proudly presented by Nuclear War Now! Productions. This recording is perfectly demonstrative of the goal that Saltas set for itself from the beginning. While all the elements that made Irkallian Oracle and The Funeral Orchestra so captivating are still present, they have been stripped down to their primordial essence, thus eschewing any perceived need to embellish the gravity of the sound with any form of discernable melodic tendencies. The austerity of the band’s approach is emphasized by the choice to rely on less instrumentation than what is typical for the genre. Instead of using both guitar and bass to achieve a fuller spectrum of sound, on this first recording Saltas has opted for a single, down-tuned baritone guitar that rumbles circuitously through each of its voluminous progressions. Accompanying the pulsating, low-end sustain of the guitars are the ominous vocals that irresistibly beckon the listener to succumb to his demise peacefully and without cause for regret. These dual vocals, performed by both members, are sometimes double-tracked and layered and at other times seem to mimic a morbid call and response from beyond the grave, as exemplified in the eleven-minute opening track, “Salt at the Temple Roots.” In the words of the band itself, this first demo represents the genesis of a creation that will take time to mold into its enduring shape. In the meantime, “Currents” will serve temporarily to satiate life’s appetite for death, to be followed later this year by the band’s upcoming second demo, “Parasites.”