by Howls of Ebb 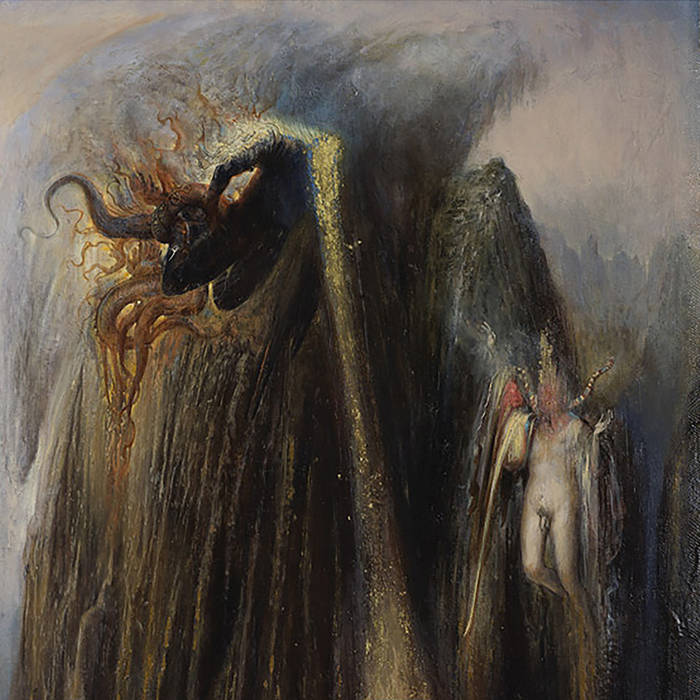 Led by Zee-Luuuvft-Huund, the alter ego of Patrick Brown, former guitarist and songwriter for the obscure but legendary Kansas City, MO bands, Ligeia and Nepenthe, Howls of Ebb quietly released two exceptional recordings on the I, Voidhanger label over the last two years. With this new album, “Cursus Impasse,” the band continues to contort the structural framework of its sound to even greater effect. Howls of Ebb consists of just two members, Zee-Luuuvft-Huund and drummer, Roteen' Blisssss (Zach Wells)—a remarkable fact considering the band’s stylistic breadth. To say that Howls of Ebb (also known as HoB, which, according to Brown, is an alternate name, not an awkward acronym) defies description is a gross understatement. It is chaotic and unpredictable. But that’s not to say that HoB’s approach is anarchic. On the contrary, it is meticulously sculpted and refined, designed to disorient and mesmerize in equal measure. The effect is both captivating and unsettling. Significantly, though the band seeks out uncharted territory through its music, it does so using traditional tools and reliable machinery, eschewing cheap gimmickry. The exploratory nature of Howls of Ebb is likely due, in some part, to Brown’s early exposure to Order From Chaos when he was a teenager growing up in Kansas City, MO. Brown’s association with OFC and related figures in that scene left a mark. One can faintly hear the echoes of those formative experiences in HoB’s compositional approach, like mutated DNA passed to a subsequent generation. The first thing one notices about “Cursus Impasse” is its shocking immediacy. The album erupts, seemingly mid-song, in a frenzied display of violence that coalesces into a stirring gallop, driving the track—entitled “The 6th Octopul'th Grin”—forward, before devolving toward a melancholy culmination. Such sudden, deftly executed mood shifts are a hallmark of the songwriting on this album. Stasis appears as a burden to the band. Each song shifts repeatedly, and often unexpectedly, in unanticipated directions. As the album unfolds, the songs become increasingly complex and epic. The whole, the sum, is dissolved into its constituent parts then pieced and re-pieced together, forming a monstrous representation. Songs build into crashing waves of sound then stretch into furious passages of warped and manic riffs stitched together with the thinnest of threads. Despite the complexity HoB pursues on this album, the execution is always appropriately understated. The band never plays with a heavy hand, instead letting the instruments merge into a whole unit rather than allowing any sound to dominate. The production is central to the effect of “Cursus Impasse.” The guitars are only moderately distorted, leaving their tonality intact and the riffs clearly audible. Lyrically and conceptually, HoB’s approach is curvilinear, employing impenetrable wordplay that is often as perplexing as the music. The album, sonically and thematically, is labyrinthine, composed of broken syntax and twisted punctuation. While not directly comparable to any other band, Howls of Ebb, in general, and this album, in particular, is likely to be appreciated by admirers of bands such as Antediluvian, Negative Plane, Stargazer, and Portal. Rest assured, however, that Howls of Ebb mimics neither these nor any other band. The release of “Cursus Impasse” is a joint venture by I, Voidhanger Records (CD), NWN! (LP), and Caligari (MC).