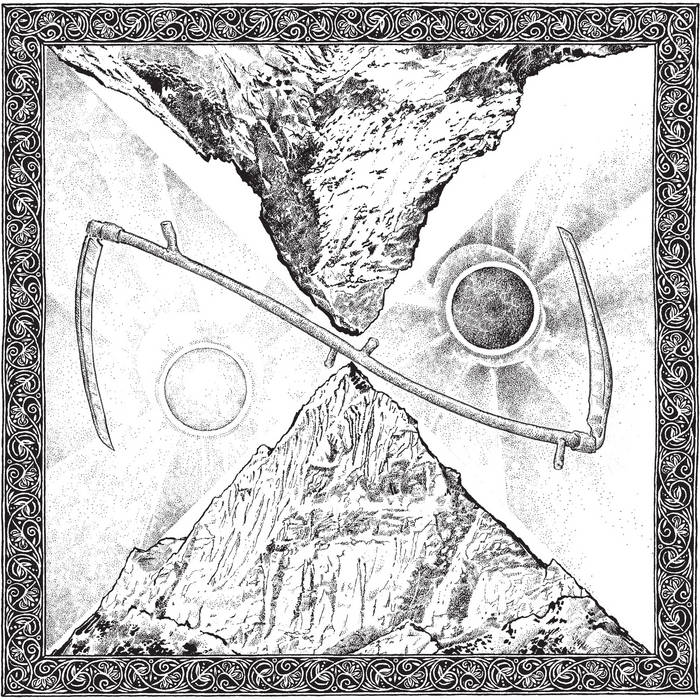 Nuclear War Now! proudly presents “D.A.V.V.N.,” the third concoction in a four-part series of alchemy-infused split MLPs, once again featuring Ysengrin’s unique strain of Hermetic Dark Metal and this time including a contribution of the consciousness-altering death metal of Stargazer. This series of collaborations began in 2015 with the “Nigrum Nigrius Nigro” split between Ysengrin and Black Grail and continued the following year with “Resvrrezionespiritval,” which was jointly conjured by Ysengrin and Sartegos. Each of the four installments represents a different classical element from the alchemist’s arsenal – Nigredo (earth), Albedo (water), Citrinitas (air), and Rubedo (fire) – the sum of which comprise the fundamentals from which all physical manifestations are constructed. This particular iteration focuses on the theme of Citrinitas, which also refers to “yellowness,” or the emergence of the “solar light” that alchemical tradition posits to be inherent in one’s being. As such, the observer will witness several references, both lyrical and visual, to the opposing Sun and Black Sun.

The Ysengrin contribution to this recording is over three years in the making, and thus it assumes the properties of an aged, sulfurous wine. As first practiced on its preceding split with Sartegos, Ysengrin has opted to forsake the ubiquitous presence of the electric guitar in favor of a more stripped-down sound featuring bass guitars, both clear and saturated, and the more occasional appearance of an acoustic guitar. The result is one which allows the listener to perceive each element and subtle nuance of the music more fully. From the outset of the first track, “Mont Sitrin,” the interplay of clean, dual bass guitars combined with the guest vocals performed by Abdias (best known for his work in שְׁאוֹל and as manager of Exitium Productions) immediately establish the haunting atmosphere that pervades Ysengrin’s somewhat revamped approach. A second guest contribution from A. Deathmonger (Charon, Hatespawn) is also present on the same principal track, which then segues into “Auroraexaltatio,” a more ambient and arcane hymn of lyrics spoken in an obscure alchemical tongue and then punctuated by a serenely unsettling acoustic coda.

The Stargazer side showcases the virtuosity and versatility that have defined the band’s twenty-plus-year tenure as one of the most exceptional in death metal. In a fashion similar to Ysengrin’s “Mont Sitrin,” Stargazer’s “The Molecular Scythe” guides the listener on an eight-and-a-half-minute aural excursion comprised of four distinct movements, which are separate on one level, but also undeniably and cohesively intertwined as a whole. These different segments are characterized by the juxtaposition of contrasting fits and starts, which mirror the process undergone in the transition of Citrinitas between the white daybreak of the Albedo alchemical stage and the full red sunrise of Rubedo, which is yet to come. This tortured process is essential in the effort to reach the blood-giving redness of life achieved in Rubedo, for without it, an unfulfilled return to the emptiness of Albedo is all but guaranteed.

As a whole, “D.A.V.V.N.” reminds us that the true greatness of the split recording lies not in the simple addition of two bands of mutual respect and admiration, but much more so in the ability to merge those qualities into something that truly stands on its own merits. Perhaps even more impressively, this release also serves to bridge the thematic gap between its predecessor in the series, “Resvrrezionespiritval,” and the final split installment to be offered at a later date.