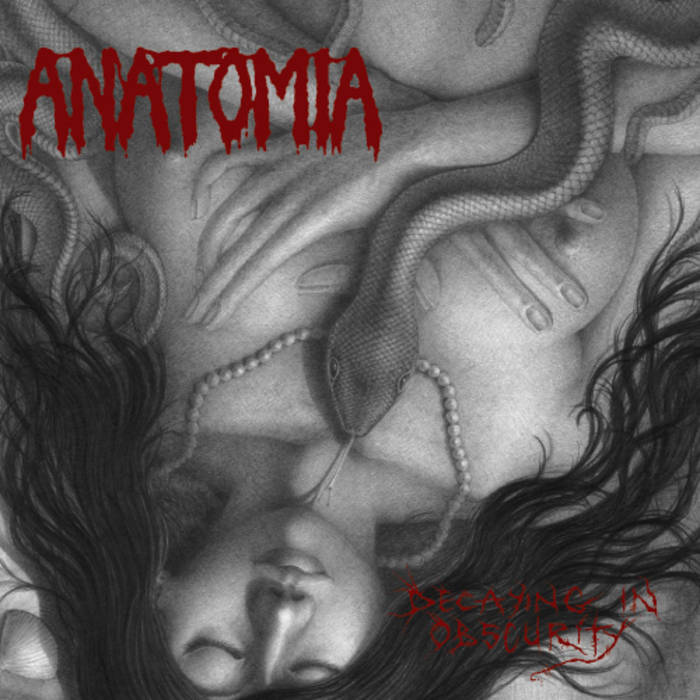 Contorted and anguished. Blissed-out and serene. Spasmodic impulses forcing irregular lurches and twitches. There are infinite shades and varieties of death, and yet its certainty and mystery terrify the human soul to its core. Anatomia breathes in the foul stench produced by this final state of human existence and spews it back at the listener. The band’s Death Doom sound captures perfectly the cold immobile grip of mortal expiration. Having evolved out of the decrepit corpus of Transgressor, a band that is highly regarded yet rarely mentioned, Anatomia has maintained a consistently low-key profile while producing a tremendous body of work. With its second album, “Decaying in Obscurity,” Anatomia demonstrates that its loyalty to the craft of Death Metal supersedes all other drives of the music. But, as seasoned veterans of the underground, the members of Anatomia do not rely on the mere regurgitation of ideas. While the band’s first LP, “Dissected Humanity,” manifested as an extension of the sound Autopsy captured on “Mental Funeral,” Anatomia’s new album further expands the band’s vocabulary. Every bit as bleak and morose as “Dissected Humanity,” “Decaying in Obscurity” demonstrates definitive evolution for the band. An expanded palette of texture, tempo, and melody characterizes this album and the incorporation of well-placed and subtle keyboards adds to the macabre atmosphere. The lens of horror through which Anatomia projects its vision has taken on a wider spectrum and new dimensions are explored. Rather than sacrifice sound quality, this DLP version has been cut at 45 rpm to ensure that Anatomia’s low-end death emanations are captured with the greatest integrity.