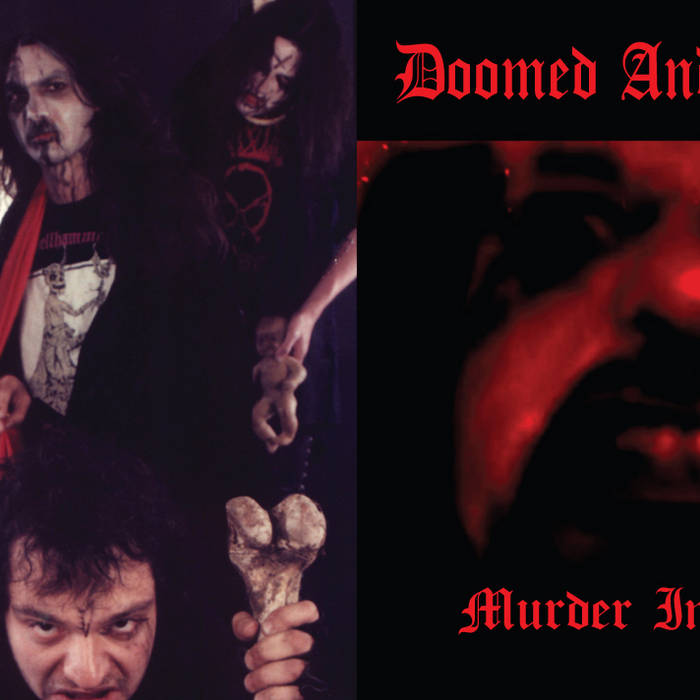 While most well known for playing bass in Sadistik Exekution, Slave’s solo material depicts obscure and highly unpredictable emanations of a mind unrestrained by, but knowledgeable of, the conventions and trappings of underground metal. Indeed, there are few individuals in the underground metal scene who rival Dave Slave in terms of both talent and eccentricity. (Necrocock is one of the few that comes to mind.) It has been several years since he has executed a proper release and most of his solo projects are obscure and difficult to find. Doomed and Disgusting is the moniker of the most prominent of Slave’s current projects. Slave plays all of the instruments for Doomed and Disgusting, and the sound is every bit as unsettling and peculiar as Slave himself. With Doomed and Disgusting, Slave primarily focuses on doom of the most unconventional variety as only Dave Slave could produce. The track included on this 7”, entitled “Murder in the Dark,” is more aggressive and manic than much of the previous Doomed and Disgusting output. As such, it is perfectly suited for presentation with the Sadistik Exekution material despite the fact that the recordings are separated by more than 20 years. Of all the extreme underground metal bands to emerge from Australia, Sadistik Exekution was unquestionably among the most highly respected and generally depraved sounding. This split 7” contains Sadistik Exekution’s monumental “Suspiral” demo – the second release by the band. Originally released in 1991, it is a raw exploration of the sonic territory to which Sadistik Exekution would lay claim with its debut album, “The Magus,” that same year. Charged with the same spun out demonic psychosis that characterized all of Sadistik Exekution’s earliest work, “Suspiral” is among the most frenetic and anxiety-inducing recordings of its era.