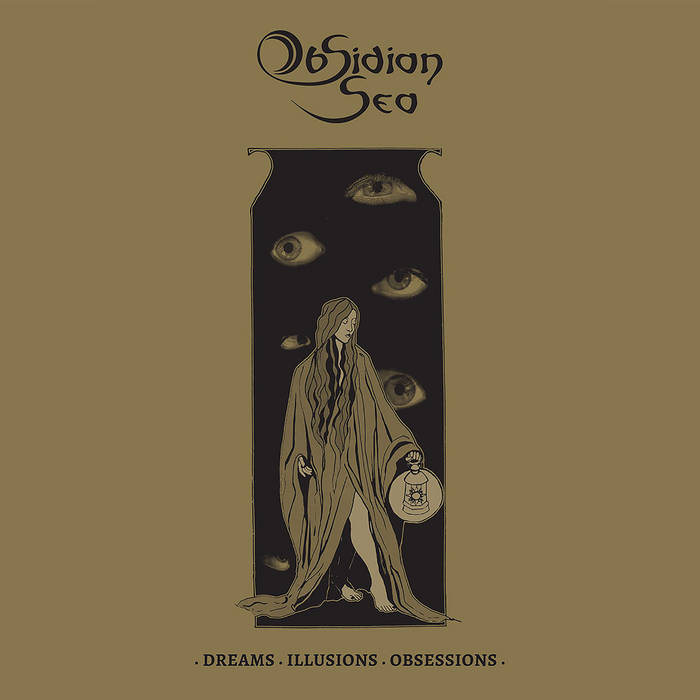 Bulgaria is not the most obvious place that one might look to in search of the best recent examples of traditional doom metal. That said, Obsidian Sea, a Bulgarian band formed in 2009 with one demo and two albums to its credit, has established its own legitimate claim as a torchbearer for a subgenre that has splintered into many different subspecies since its roots took hold several decades ago. In particular, the band’s second album, “Dreams, Illusions, Obsessions,” demonstrates its ability to successfully channel the spirit of monumental predecessors such as Candlemass and Saint Vitus. Originally self-released on CD and also on cassette by Serpent Eve Records in 2015, Nuclear War Now! is proud to present this recording for the first time on LP, as well as once again on CD format, in order to give this deserving band from a relatively obscure location the attention that it merits.

The sources from which Obsidian Sea derives much of its inspiration are clear from the very outset with the album’s opening riff in “The Trial of Herostratus,” which could have just as easily been written thirty years ago for inclusion on Candlemass’s “Epicus Doomicus Metallicus.” Additionally, the crawling tempo and darkness that pervades the second track, “Confession,” and others are strikingly reminiscent of Saint Vitus’s despondent 1995 masterpiece, “Die Healing.” In fact, the delivery of the vocals throughout “Dreams, Illusions, Obsessions” bears a notable similarity (although perhaps with a somewhat lesser degree of perceived maniacal derangement) to that of the original and revered Saint Vitus front man, Scott Reagers, who returned for his encore performance to record the aforementioned “Die Healing.”

These likely influences aside, this recording is anything but a cheap imitation of the products of a bygone era. One aspect which sets Obsidian Sea apart from many of its contemporaries is the prominent role that the bass guitar plays as an entity of its own. Rather than merely adding depth to the guitars by shadowing their movements, the bass instead often provides an additional, separate voice of its own, frequently filling in the voids between guitar notes and chords as a unique, primary contributor. Further accentuating this role is the fact that the guitar solos transpire without the blurring and diluting effect of an overly fuzzed-out rhythm guitar, instead relying on the sole power of the bass to anchor them to the song. The result of this practice gives each of the instruments its own space to express itself independently, in addition to serving as a component of the whole. Also noteworthy is the limited but effective use of keyboards, which surreptitiously appear and meander in and out of “Child in the Tower,” providing both melodic fills and harmonic accompaniment under the guitar leads.

With “Dreams, Illusions, Obsessions,” Obsidian Sea thusly pays homage to its ancestors while simultaneously augmenting the original formulas they had concocted, resulting in an album which greatly deserves attention outside of the band’s previously unheralded regional confines.