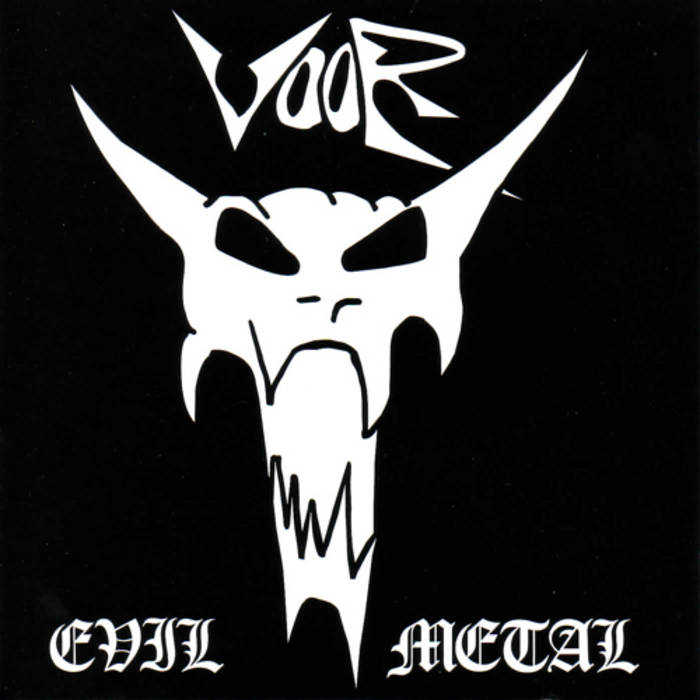 Voor is among the many bands that emerged in the 1980’s, released a handful of tracks, and disappeared leaving behind them just two demos which, although nearly perfect, have been relegated to obscurity for the past 25 years. Many of these classic “demo-only” bands have been discovered and reissued long before now, but Voor has remained hidden despite the cult status that their work has attained. After several years of searching for the band members in order to gain permission to disinter the remains of these mysterious recordings, NWN! has at last unearthed the wretched carcass of Voor. Despite their limited output and the untimely demise of the band, Voor have been worshipped and revered by fans of evil Death/Speed Metal ever since the tape trading days. While Voor began in roughly the same time and place (early 1980’s, Quebec), they never achieved the notoriety of their comrades in Voivod (see Away’s liner notes in this release). Instead, although a European tour was in the works and numerous labels were approaching the band based on the rabid interest generated by their demos, their drummer quit unexpectedly and the band quickly dissolved. A quarter century later, however, the remnants of this savage militia’s violent rampage still evoke the most unholy bloodlust. The first demo, released in 1985, was a live rehearsal recording with no overdubs. The live nature of this demo enhances the malicious effect of Voor’s attack by accentuating the band’s steadfast reliance on primitive and sinister aggression as their morbid trademark. The following year, Voor entered a local studio to record their second demo. Simply (and accurately) titled “Evil Metal,” this tape featured re-recorded versions of three of the tracks on the first demo as well as one new song. The guitars on these recordings cut like shrapnel across the churning mechanized death sounds of the rhythm section resulting in a recording of unmatched devastation and cruelty. The vocals, caustic and raw, tear across the rotten fabric of the songs with an added bestial harshness that lends the tracks a proto-Black Metal character. In truth, these recordings should be widely praised as among the earliest and most powerful of the first wave of Death Metal. Indeed, so potent are the songs on these demos that Voor’s relative obscurity through the years appears now as an incomprehensible injustice. Accordingly, the purpose of this release is to provide Voor a formal vinyl and CD reissue so that their work can be properly appreciated. The regular version of this LP compiles the two Voor demos, both remastered for vinyl by James Plotkin. The “Evil Metal” tracks were mastered directly from the original master tapes, while the source for the 1985 demo was a well-kept master cassette provided by the band. The Die Hard edition includes a second LP containing additional Voor outtake tracks as well as the Roswell demo recorded in 1992. (Roswell was a post-Voor project featuring guitarist Sylvian Gilbert and bassist Steve Lessard. More eccentric and punk-influenced, the Roswell recording provides a suitable epilogue to the history of this early period of Voor).