Genesis of the Unaltered Evil 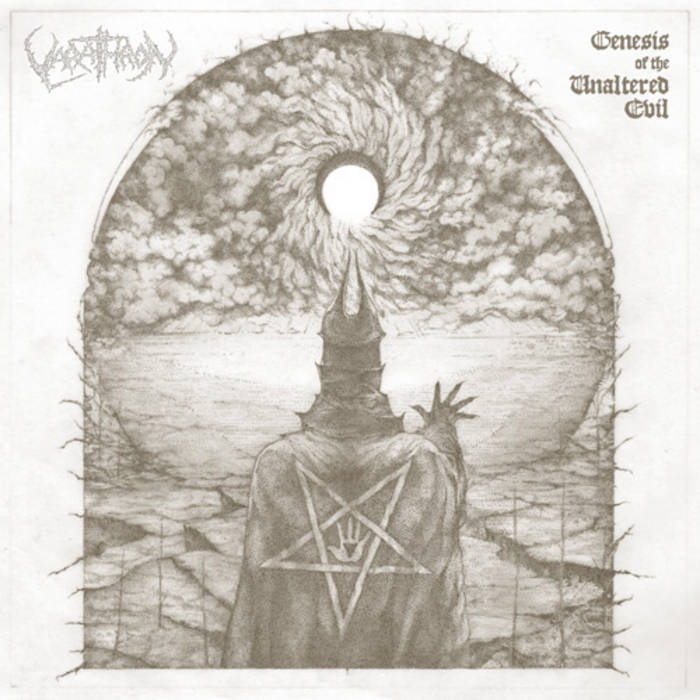 To understand the defining traits of Greek Black Metal, one need only to listen to “The Tressrising of Nyarthotep” by the mighty Varathron. This track, first appearing on the “genesis of Apocryphal Desire” demo, possesses all of the victorious grandeur and tragic melancholia that are the essence of the early 1990’s Greek Black Metal sound. Along with contemporary releases by Rotting Christ and Necromantia, Varathron’s demo material firmly established a style that is thoroughly Grecian in character. Thick with a damp and heavy Hellenistic darkness, Varathron explored a sound that was infused with the epic and the ancient. As with so much of the most evocative and potent Black Metal, the ancient currents are revealed through the expression of the modern. Varathron’s music is as mystical as it is visceral. The recordings on this compilation comprise the earliest seeds of what would become one of the greatest bands in the history of the genre. This collection contains all of Varathron’s work leading the band toward the creation of their monumental debut LP, “His Majesty at the Swamp.” The two demos, “Procreation of the Unaltered Evil” and “Genesis of Apocryphal Desire” reveal the steps that Varathron took that would later come to fruition on their first album. This collection also contains the more refined tracks that were utilized on their first vinyl releases – the “One Step Beyond Dreams“ EP and “The Everlasting Sins” tracks from the split LP with Necromantia – and three additional bonus tracks recorded during the early years. As with the forthcoming Rotting Christ demo collection that NWN! will soon release, the songs on this compilation of Varathron’s early recordings reveal the painstaking emergence of a band’s identity. Absorbed in the context of early works by Varathron’s Greek contemporaries, one also witnesses the development of a sound uniquely specific to a geographic region, so specific, in fact, that it is impossible to imagine such a multidimensional approach to Black Metal originating anywhere else. Both the Regular and Die Hard editions of this release will feature gatefold jackets with artwork by Manuel Tinnemans and layout by Tilmann Benninghaus as well as a 48 page zine booklet. The Die Hard edition will also come with a separate LP (with jacket) featuring the “Live at the Swamp” demo material. Originally released on tape in 2004, “Live at the Swamp” features a live recording and rehearsal recording from 1991. These recordings have been remastered and cleaned up by James Plotkin and the sound quality on this LP, although still quite raw, is markedly better than the original tape version.