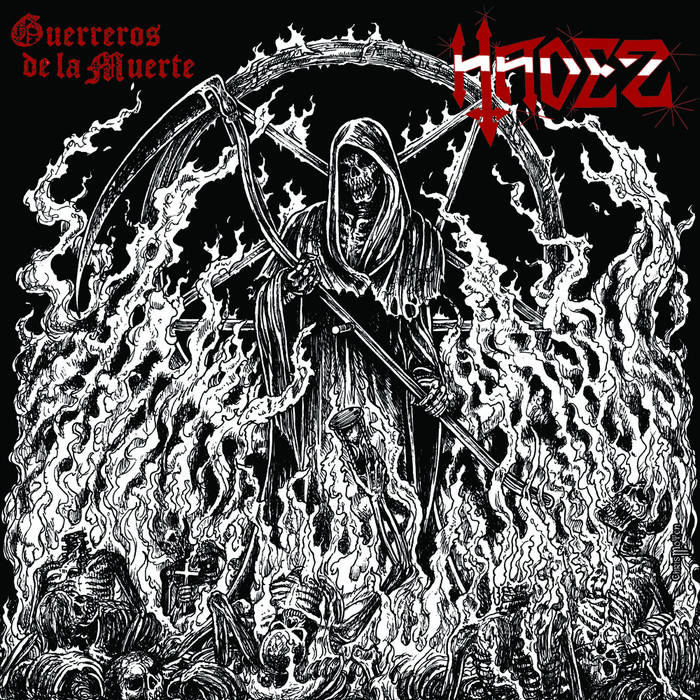 Hadez has long represented the darkest emanations from the land of Peru. Most well-known for the exceptional “Aquelarre” LP released in 1993, considered by many to be among the most triumphant statements from the South American Black/Death scene, that album served as a the promise of the band’s series of demos that the band self-released between 1988 and 1992. Those demos are the subject of this Nuclear War Now! boxset which charts Hadez’ development from elementary stylings of the band’s three-song introductory demo to the sharpened focus of the debut LP. The first demo, 1988’s “Guerreros de la Meurte” (from which this set derives its title), portrays the classic South American sound that Hadez and others created. Indeed, the influence of Brazilian bands such as Sarcofago is immediately apparent in all of the Hadez demo recordings. Unrefined and unhinged, the “Guerreros de la Muerte” demo evinces the crude passionate approach that is emblematic of the early South American Black/Death style. Only distributed to friends and magazines, the demo saw little circulation until it was reissued on CD in 2005. In 1989, Hadez released its second demo entitled “Altar of Sacrifice.” That demo was a far more controlled endeavor though it still teetered on the brink of collapse as the band members played at what seems to be the outer limits of their abilities in an effort to achieve the most chaotic and extreme sound possible. Drawing influence from the darker Thrash acts but still retaining an angst and simplicity derived from Punk, the eight tracks on “Altar of Sacrifice” clearly mark a step forward in terms of both composition and production. By the culmination of the demo, the almost post-punk inspired Death/Thrash assault “Death Terror,” it is clear that a more potent evil lurks within the heart of Hadez. The third demo, 1990’s “Hadez Attack,” finds the band charting new territory. A wicked darkness enshrouds the band as they grind through the 30 minute recording. Rich in low-end texture and driving intensity, “Hadez Attack” shows the band beginning to settle into a style that would soon come to fruition. The bass is more pronounced on the third demo and the vocals are more blackened and sinister than the two previous recordings. Even the artwork adorning the cover was more intricate and foreshadowed the change in the sound that listeners would find. Noting the darker direction to which Hadez had turned, Euronymous approached the band about recording its debut LP for Deathlike Silence – an eventuality that would not take place. The final demo prior to Hadez debut LP, entitled “Extreme Badness on the World,” is a remarkable statement unto itself. The inclusion of a second guitarist and the band’s increased experimentation augmented the sound Hadez had cultivated by that time. The demo features extraneous sounds and effects that add a peculiar atmosphere, yet the deranged intensity remained intact. Each of the songs on “Extreme Badness to the World” were previously released on the earlier demos, albeit in a markedly different form. Treated with effects and completely incomprehensible, the vocals on the demo are especially distinct and nightmarish. This demo finds Hadez nearly perfecting its unique approach to South American Black/Death. By re-recording their previous tracks, Hadez attempted to catalog the most refined versions of the best songs the band had written over the previous four years in preparation for the onslaught that would be “Aquelarre.”