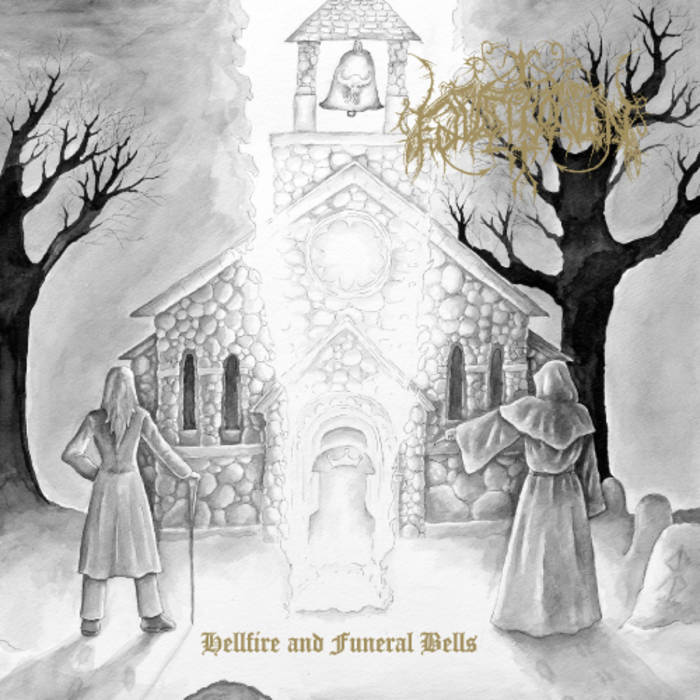 The release schedule of Norway’s Faustcoven is as slow and deliberate as the band’s music. It has been nearly four years since the last Faustcoven album, but with this new record, “Hellfire and Funeral Bells,” Faustcoven demonstrate the virtues of a band taking time with its craft. This album, like all of Faustcoven’s work, is steeped in a classic doom sound, but exhibits a recognition and infusion of more modern and extreme forms of metal as well. For these reasons, Faustcoven has, through the years, commanded the attention of an extremely dedicated and fanatical core of admirers even though the band has, for the most part, been under the radar of the scene at large. Since its inception, Faustcoven has been a nightmarish projection of the mind of Gunnar Hansen — the only consistent member of Faustcoven. For recording purposes, Hansen is joined by Johnny Tombthrasher on drums. Yet despite the fact that it was executed by just two individuals, the sound on “Hellfire and Funeral Bells” is massive. Hansen’s songwriting is unparalleled within this style of doom metal. Every riff is crafted to contribute to the movement of the song as a whole. Never static, the tracks evolve and build as the riffs are seamlessly merged into place within the horrifying soundscapes. Hansen has been consistently refining and focusing his approach with every new album and release. This new album is very likely the most succcesful effort Faustcoven has yet put forth.