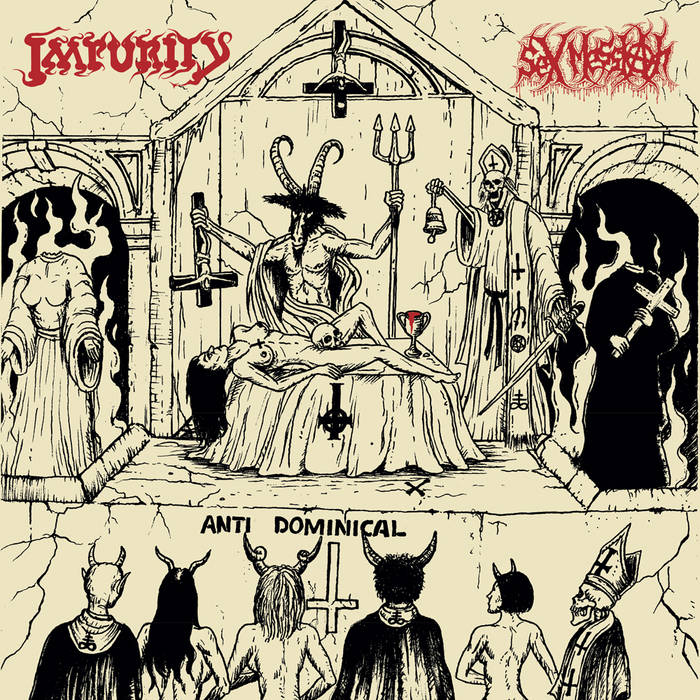 Best known for its majestic 1993 debut album, “The Lamb’s Fury,” Impurity’s role in the evolution of black metal from the original species of its first-wave incarnation into its second-wave iteration is unmistakable. Recognized by some as the “Brazilian Beherit,” Impurity inherited and transformed the sound that their Brazilian brethren, Sarcófago, had first developed a few years prior to Impurity’s formation. Sex Messiah, on the other hand, emerged from the island nation of Japan within the past decade and to this point has spread its disease through a demo, a series of EPs, and now two split releases. In somewhat of a contrast with Impurity, Sex Messiah’s brand of black metal is more reflective of the early European tradition first established by bands such as the great Hellhammer.

The blueprint for the unpredictable pairing of these two bands was first drawn up at the NWN Fest Volume IV in November 2014, where Moenos of Sex Messiah conspired with the members of Impurity to plan a joint tour of Japan. In accordance with this plan, Impurity accompanied Sex Messiah on a tour of the latter’s native land in March 2015. In support of this tour, the enigmatic High Society Satanic Records released a seven-song split recording on CD format in limited quantities, as is the label’s custom, and it sold out quickly on tour. Nuclear War Now! was subsequently approached to release the same recording on vinyl format, and thus “Vomiting Blasphemies Over the World” is hereby presented for further proliferation.

The opening three songs, as performed by Impurity, continue much in the same vein as that recently displayed on their 2012 album, “Bonfim Moritvri Mortivis.” Driven by Guilherme Hell’s relentless percussive blasts and possessed by Morbid Lord Ron Seth’s maniacal riffing, Impurity’s share of this recording is highlighted, as always, by Ram Priest’s regurgitated vocal eruptions. The four songs recorded by Sex Messiah achieve their feral potency largely through their primitive production, which lends a rawness that is very reminiscent of the type displayed long ago on the first generation of proto-death/black metal demos of bands such as Poison (Germany). Considered as a whole, these recordings successfully merge two bands whose styles are similar enough to attract mutual audiences, while different enough to uniquely complement, rather than simply reflect, one another.