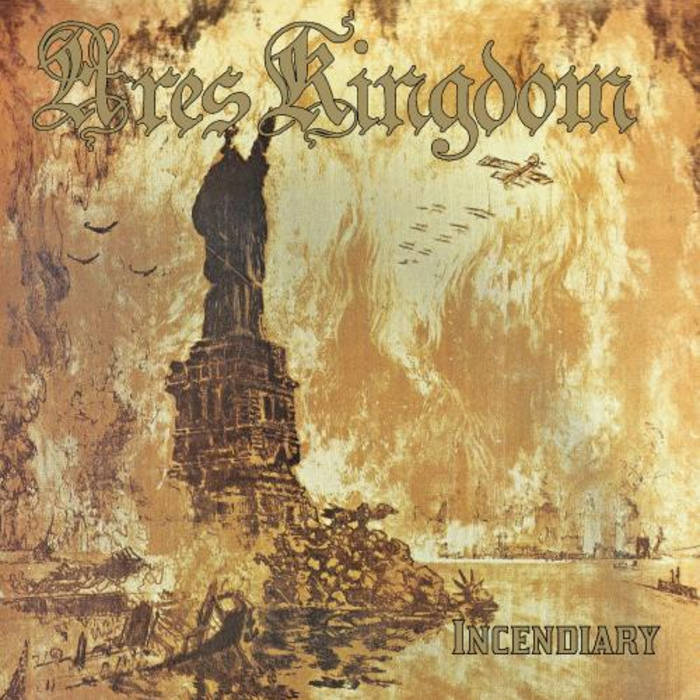 The decay of empires—be it spiritual, political, or cultural—begins internally. Rotting from within, tiny fissures beneath the surface open into gaping crevices that expose the core, fatally weakening the entire structure. The façade begins to crumble and the corrupted inner workings are exposed… The Individual confronting this macrocosmic atrophy is the conceptual and philosophical backdrop against which Ares Kingdom’s “Incendiary” unfolds.

“The weak trample and feast on the weak –
Yet fail to become strong
Strength earned through blood and tears
Shown and measured in grace
Staying one step ahead of the flock
Vigilant in your house of pain
The realization your throne is an illusion
A liberation and a challenge
Stand in awe or fall to your knees and grieve.”
–from Silent Mortal Flesh (Convergence)

Put simply, “Incendiary” represents yet another peak for AK - a profound accomplishment considering the depth of their magnificent 2006 LP, “Return to Dust.” In fact, in terms of both composition and performance, it may now be convincingly argued that they are unequalled.
With almost historical precision Ares Kingdom’s music descends directly from the traditions of classic heavy metal, thrash and death metal, while at the same time transcending any such categorization. Theirs is a sound attributable to AK alone, yet it remains a sound familiar to those that still remember Slaughter Lord, Mefisto and Poison today.
Although Chuck Keller – lead and rhythm guitars (Order From Chaos, Vulpecula) is the architect behind Ares Kingdom, their sound would not be possible without Mike Miller – drums (Order From Chaos), Alex Blume – bass/vocals (Nepenthe, Blasphemic Cruelty), and Doug Overbay – rhythm guitar, each of whose performance here clearly exhibits years of experience and rare chemistry with one another.
Clearly “Incendiary” was conceived, composed and executed with the kind of vision and effort characteristic of the creation of ancient monuments. Musically the band have once again proven themselves to be uncompromising defenders of the faith, and the album’s synthesis of several subjects and ideas becomes an inspiring declaration for the Individual against complacency, dogmatism and cloven-hoofed flock ignorance.
Indeed Ares Kingdom has returned to remind us that salvation remains within reach…