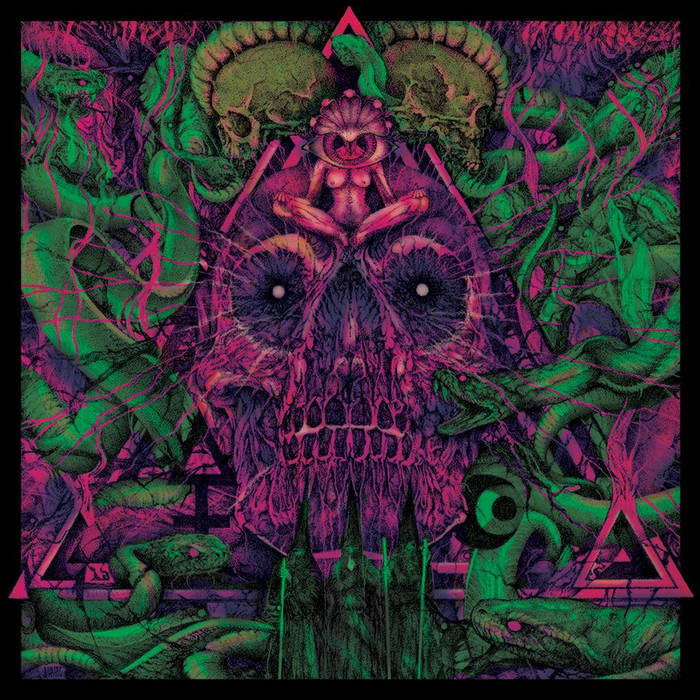 In the late 1980s, Doom Snake Cult appeared like a hallucinatory vision in the same Nevada desert that almost simultaneously spawned the likes of their psychotropic substance-consuming brethren, Goatlord. Although it is commonly believed that Doom Snake Cult began as a post-Goatlord project, the truth is that DSC was actually a separate entity that existed alongside Goatlord throughout its existence. In fact, Doom Snake Cult recorded its first and only full-length album, “Love, Sorrow, Doom,” in 1990, one year prior to Goatlord’s recording of “Reflections of the Solstice.” Obvious parallels and direct connections between the two bands exist, not only because of their common location and confessed fondness for psychedelia, but also due to their similar musical output and shared members. Most notably, Ace Still’s immediately recognizable and distinctively harrowing vocals adorn both band’s albums. Additionally, Doom Snake Cult’s guitarist, Nelg, is confirmed to have performed in lieu of Joe Frankulin on Goatlord’s first-ever recorded version of “Sacrifice.”

In the same year and manner of release as the North American version of Goatlord’s first album, Doom Snake Cult’s “Love, Sorrow, Doom” album was first unleashed on CD and cassette by JL America in 1992, two years after it had been recorded. Originally, in 1990, the band had signed with Torrid Records – of Exodus “Bonded by Flood” fame – but those plans never came to fruition due to Torrid’s eventual dissolution, and thus JL America became the official label for the release of “LSD.” In addition to Ace Still’s trademark vocal delivery, the album is characterized by a guitar tone that harkens back quite convincingly to that of Hellhammer, which was undoubtedly one of the band’s primary influences. However, what distinguishes DSC from many of those from whom they drew their inspiration was their propensity to dwell in the sub-tempos of black doom that force listeners to languish in the darker regions of their consciousness.

In 2004, Nuclear War Now! rightfully sought to resurrect this masterpiece by reissuing “Love, Sorrow, Doom” on vinyl LP format for the first time. Now, eleven years later, NWN! endeavors to further cement Doom Snake Cult’s oft-overlooked legacy. Much in the same schizophrenic way in which a brain functions under the influence of hallucinogens, this re-release continues in the tradition of previous versions by altering a few of its prominent components. As with the transition between the original JL America release and the first NWN! version, the cover art has once again been replaced, this time with a much more fitting piece from the incomparable Manuel Tinnemans, with the layout as a whole executed brilliantly by TLMN. Also, just as the original track list had been modified for the 2004 vinyl release, the current version’s track list reflects the band’s recent decision to improve the sequencing of songs. As such, this version opens with “Enchanted Cerebral Forest,” which immediately beckons the listener to “journey to the center of your mind” and perfectly sets the scene for the dark introspection that one would be sure to undergo upon following the inherently prescribed chemical enhancement.