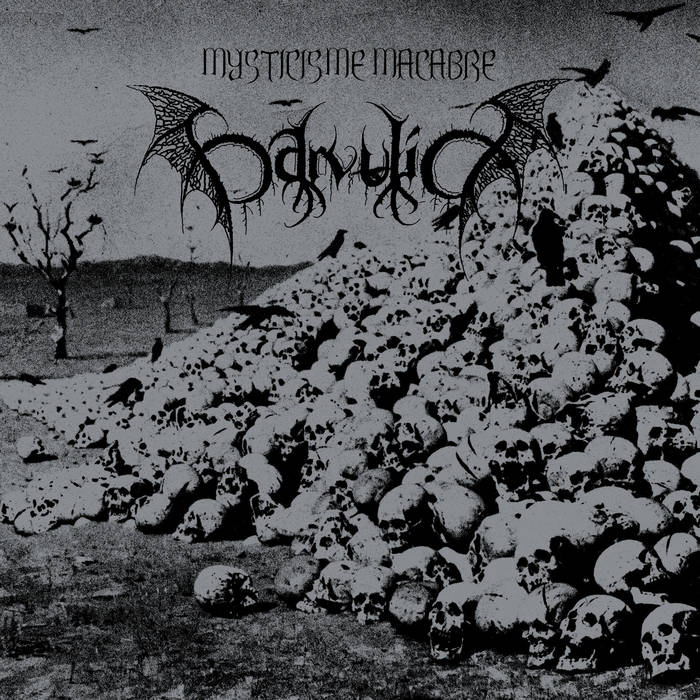 Although the band is entirely French in its nationality and stylistically in its brand of black metal, Darvulia likely derives its name from the Hungarian witch, Anna Darvulia, a servant of the infamous Elizabeth Bathory who is said to have provided Bathory with guidance during the most prolific period of the countess’s notorious atrocities. It is an appropriately adopted moniker, given that the band’s musical output would serve as a fitting soundtrack to the mind of a depraved psychopath. Nuclear War Now’s admiration of Darvulia’s work extends back to the band’s second full-length album from 2005, entitled “L’Alliance des Venins,” which NWN! has credited as being a masterpiece of French black metal. Despite the fact that it has been somewhat overshadowed by the band’s sophomore effort, Darvulia’s third album, “Mysticisme Macabre,” follows the same recipe established by its predecessor five years prior to the latter album’s original CD release by Battlesk’rs Productions in 2010. Another six years later, “Mysticisme Macabre” now receives its first release on vinyl LP format, courtesy of a joint endeavor between Nuclear War Now! and Battlesk’rs Productions.

As with Darvulia’s previous album, “Mysticisme Macabre” is most effective in its entrancing, repetitive song structures. Individual songs tend to abruptly alternate between blisteringly-fast and hypnotically-languid tempos. In combination with the unsettling effect of these contrasting tempo shifts, the riffs further disorient the listener with their unyielding and cyclical progressions among atonal, tremolo-picked chords and dissonantly arpeggiated sequences of notes. Rather than attempt to impress its audience with an unending barrage of constantly changing intracacies, Darvulia instead chooses to leave its mark with the narcotic reduplication of this proven formula. In addition, the abrasively throaty vocals present throughout greatly contribute to the overall portentous nature of the music. Occasionally, as in “Le Rituel des Sept Serpents,” two separate vocal tracks recorded in alternate pitches and deliveries are asynchronously superimposed over each other to further magnify a song’s discomposing outcome. The synthesis of these elements results in an album that serves to confirm Darvulia’s inarguably significant residence in the canon of French black metal.