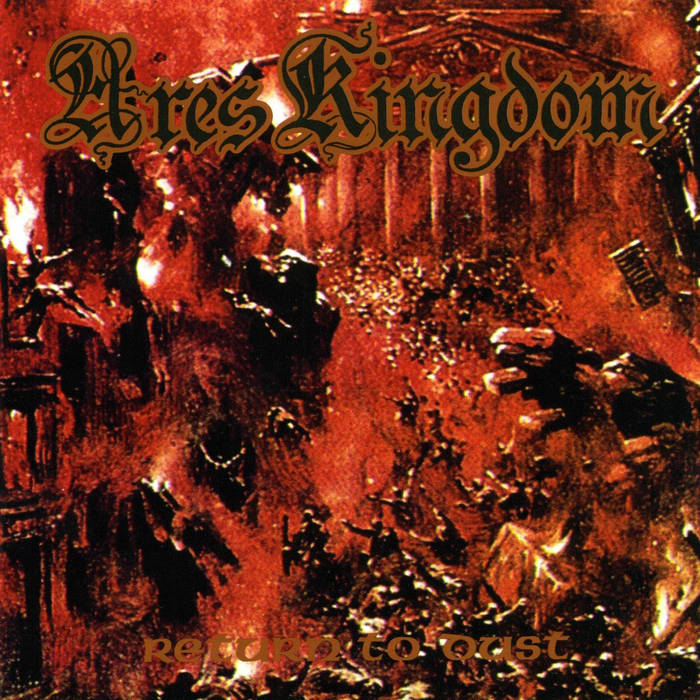 Storming the frontlines of the underground with an overwhelming thrashing onslaught. 8 tracks, 42 minutes: Firestorm Redemption, A Dream of Armageddon, Failsafe, Fear Itself, Lamentations, None Escape, Sins of the Father, Ironclad. Review from Vorfeed.net Artist: Ares Kingdom Album Title: Return to Dust Label: Nuclear War Now This is the first full-length album from Ares Kingdom, an American band featuring members of Order From Chaos and Vulpecula. They play thrashy death/black metal. The sound on this album is ideal. There’s a touch of distortion on the guitars, which adds a perfect amount of roughness to the sound. The drums have lots of impact, the bass is just loud enough, and the vocals are way up front, a choice that makes them surprisingly easy to understand. In terms of style, this band sounds a bit like Order From Chaos, but the songwriting here is even more epic and involved. The mix of aggressive and introspective moments reminds me of early Destroyer 666, as do the inspiring lyrics, but Ares Kingdom conjure up a different sort of atmosphere. Between the chaotic riffs and meticulous song structure, it’s as if the band is constantly treading on the line between order and disorder. “Firestorm Redemption” is a perfect example. This song is highly structured, with recurring lyrical and guitar themes, but the lead guitar parts run wild! As the lyrics become more and more evocative of fire, the song becomes more unpredictable. The marriage between words and music on this song is really impressive. “A Dream of Armageddon” slows things down a bit. This is the album’s epic, with plenty of stately, powerful riffs. The drums and bass get a big workout, as well. This song is a lot of fun to sing along with, largely due to the excellent vocal delivery during the chorus. I dare you to sit still after the song speeds up near the end! The beginning and end of “Failsafe” are about the thrashiest things on the album. This is a short, mostly quick-tempo song, but it’s still overflowing with riff changes, atmospheric parts, and neat solos. “Fear Itself” starts out with an extended instrumental section. It sounds almost as if the band is racing itself. The bass line right after the vocals first come in is killer! After a brief false ending, the song begins in earnest. The guitars and bass on this song seem intent on bludgeoning the listening into submission. The main riff on “Lamentations” is the best on the album — it’s just insanely good. The hopeless yet triumphant atmosphere on this song is tremendous! And just when you think it can’t get any better, they bring in ANOTHER heavy riff. The interplay between the rhythm and lead guitar near the end is shiver-inducing. “None Escape” is a powerful instrumental, with some inspiring melodic solos. It leads into “Sins of the Father”, a quiet guitar interlude. Taken together, these songs make it clear that this band understands HEAVY metal, not just death, black, and thrash. The lyrics on “Ironclad” are just plain amazing. This is metal itself, expressed in one proud statement of war. The chorus alone puts most songwriters to shame! The music is equally good. There are tons of changes on this song, each with its own quality riff, to the point where “Ironclad” is stuffed with more than enough for two or three songs. And the ending is so good they decided to come back and do it over again! Return to Dust is easily the best album so far this year. Ares Kingdom is the perfect blend of everything that makes metal so damn great, and this album is the pinnacle of their work so far.