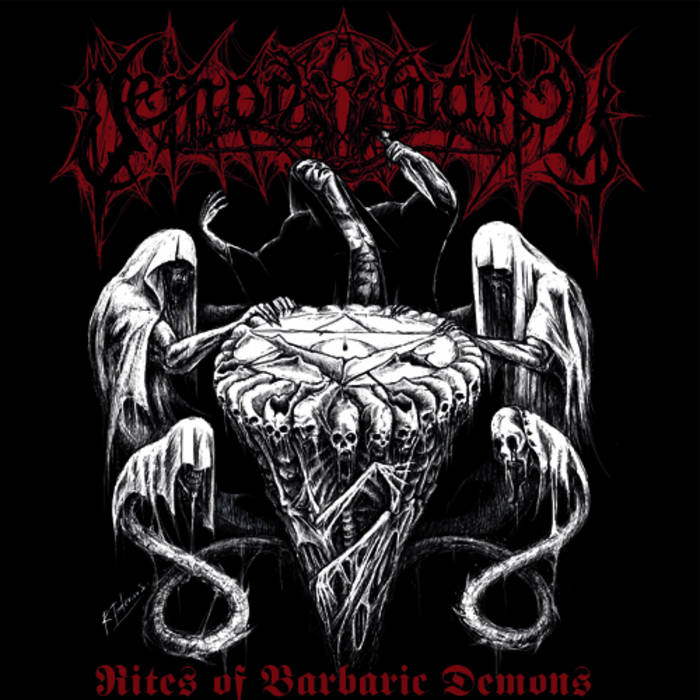 Demonomancy is among the very few bands who secured a release through NWN! the traditional way; that is, by sending a copy of their excellent self-released demo, “Bearers of Black Arts.” The infernal intensity of Demonomancy’s sound has only progressed in the past year and the new EP entitled “Rites of Barbaric Demons” will certainly secure them a well-deserved place in the underground realms in which they lurk. Demonomancy hail from the occult depths of Rome and exist to desecrate and dismantle Italy’s holy infrastructure. Performing and recording as a three-piece, Demonomancy are maniacal in their intentions, yet calculated in their approach. They play primitive Black Metal in the vein of Beherit, Archgoat, and Demoncy, but with a sensitivity to production and precision that is uncharacteristic of most bands who tread these paths. No guitar solos or extraneous influences are utilized to distract the listener. Instead, the band relies solely upon its songwriting which highlights the band’s seamless fusing of cacophonous riffs and unpredictable changes in tempo. The production on this EP suits the work perfectly. All of the instruments are distinguishable and mixed according to the need of the song as a whole. The final result is a diabolical festival of ritualistic violence and blasphemy.