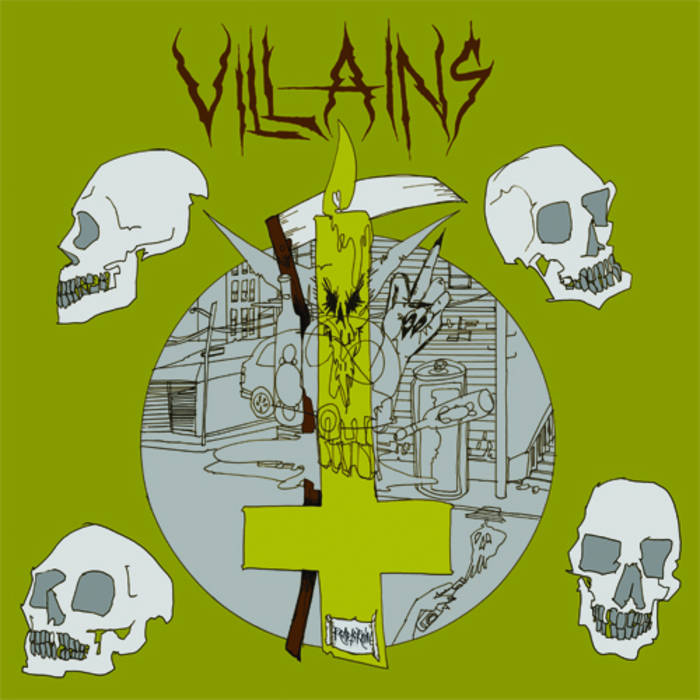 Since Villains’ inception in 2003, the band has procured for themselves a unique niche within the spectrum of underground metal. It is a niche occupied solely by Villains. The territory explored by this New York band is arguably as dark or darker than most of the pathetic Satanic and occult acts that populate the vast majority of the extreme metal underground. On their third album, Villains again vividly portray that most unholy of temples...the 21st century urban wasteland. “Road to Ruin” presents a new collection of eight hymns to the thieves, sluts, junkies, and degenerates that inhabit that realm and all the rituals of depravity in which they indulge. Here, the band mostly eschews some of the more standard punk elements present on their last album, although the gritty belligerence of the tracks still reveals the same influences. What remains is the distilled and potent complex blackened thrash for which Villains have long been revered. Indeed, “Road to Ruin” is the band’s most coherent effort to date. In terms of both songwriting and production, each of the songs here works in conjunction with the others to produce a fluid, cohesive album. Do not be misled by the use of the word “coherent,” however. Although the pieces fit seamlessly together, the image that emerges is as decadent and destructive as on Villains’ previous releases. Here, we find the same pitch black night cut open by streetlamps and malfunctioning neon signs as they bathe the debauchery below in the most grotesque light. What is revealed is as alluring as it is malevolent. “Road to Ruin” is not merely a soundtrack to the spectacle, it impels one to take part in the frenzy -- to churn for oneself the wheel of wretched decrepitude. There is no escape once you are trapped within. Witness and indulge. Observe it all through the blurry haze of alcoholic and narcotic stupor until the cacophony of drunkeness eventually abates and the light of day reveals the mess that’s left behind -- dopamine depletion and the onset of delirium tremens as the devilish thirst rises from the sickened guts into the back of the throat and the descent begins again.