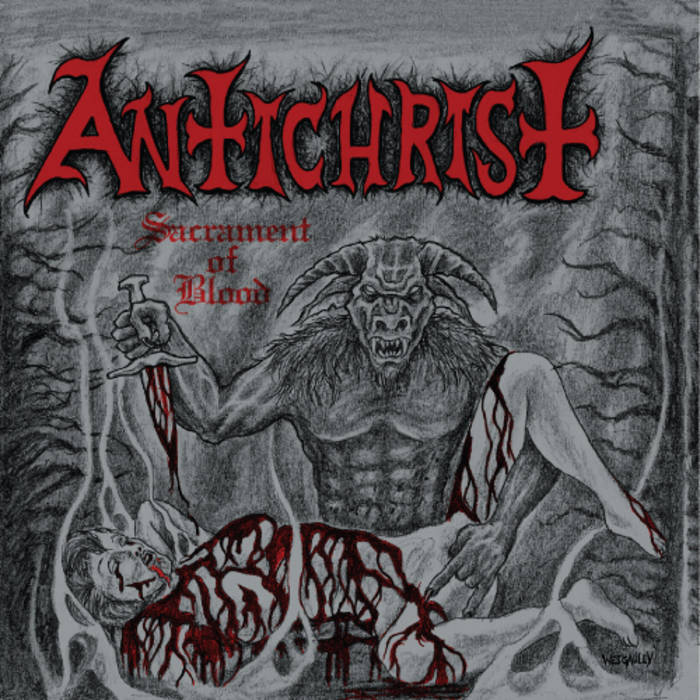 In an era in which even the most obscure demos are readily available for electronic acquisition within minutes, the likelihood of finding untapped reservoirs of brutality in underground metal is almost unheard of. Digging beneath the rubble of Ross Bay, NWN! and RBC has recently unearthed such a lost stream of malevolence. The story of ANTICHRIST begins with the merging of The Festering Arsonist on guitars and The Inciter of Armageddon on drums. At the age of just 15, these hooded demons provoked the retribution of Christ in the name of unholy dominion. Influenced by the Death Metal, Speed Metal, and Grindcore of the late 1980’s, they recorded a demo under the name Armageddon. In the early 1990’s an additional guitarist by the name of Rotting Corpse was indoctrinated into this cult, and shortly thereafter vocalist Goat Fucker and bassist The Unknown One were likewise initiated. In addition to their exposure to the well known international bands of that time period, these stalkers of the Ross Bay burial grounds were also uniquely influenced by local bands such as Procreation, Witches Hammer, Fatal Hatred, Caustic Thought, and, of course, Blasphemy. Indeed, it is ANTICHRIST’s connection with Blasphemy that is most apparent in their sound. While ANTICHRIST’s focused initially on creating disturbing and dark Death Metal, they began to gravitate toward the pure desecration of Black Metal. This was, to a large degree, due to ANTICHRIST sharing a rehearsal space with Blasphemy. In fact, it was Nocturnal Grave Desecrator and Black Winds who invoked the name ANTICHRIST for the band. (The Festering Arsonist even accompanied Blasphemy on their Fuck Christ tour in 1993.) ANTICHRIST never sought widespread attention for their demonic arts, preferring, instead, to remain in the cold catacombs of Ross Bay. Over the next four years, ANTICHRIST played only less than ten shows and entered the studio just once. In 1994, ANTICHRIST summoned its first and only recording. Consisting of 11 tracks of blasphemic annihilation, the “Sacrament of Blood” session epitomizes the horrific and unholy nature of the Ross Bay cult. Chaotic and impure and driven by uncontrollable bestial voices, ANTICHRIST unleashed some of the vilest and Black Metal North America has produced. Until 2011, however, few souls have had the extreme misfortune of being subjected to this depraved onslaught because the members of ANTICHRIST went their separate ways shortly after these tracks were committed to DAT. Years later, with the support of Blasphemy’s Deathlord, Goat Fucker and Rotting Corpse exhumed the original DAT tapes and prepared them for their first official release. NWN! and Ross Bay Cult are now proud to offer these recordings for the first time.