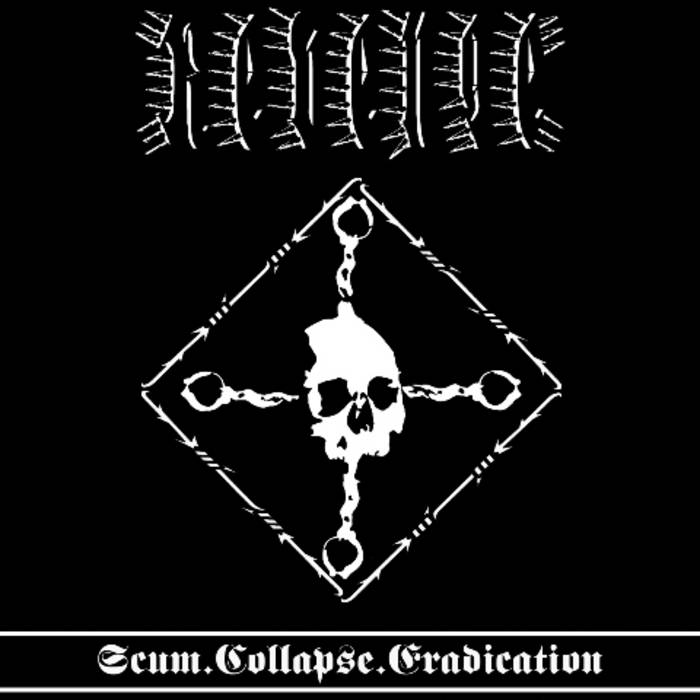 For over a decade, Revenge has persisted in cultivating what is arguably one of the most confrontational sounds in the metal underground. Immediate, controlled and utterly violent, their work stands alone in the depth of its hostility and refusal to follow trends.
On their earliest releases, Revenge established a particular sound and general approach to their music that released itself as a cacophonous flood of manic aggression. Their music has continued to evolve through the years, however, and the release of 2008’s “Infiltration.Downfall.Death” saw the band expand its approach to utilize a wider variety of song structures and recording techniques to strengthen its musical assault. Their new album, “Scum.Collapse.Eradication” continues in this vein, with further development in the way the songs are presented augmenting the extremity of the violent chaotic architecture that Revenge created with their previous output.
While Revenge still predominantly relies upon the relentless blasting fury for which they have always been revered, this album, like the last, is punctuated by moments of mid paced sections hammering down into doom ridden bulldozer riffs showing the band striking a perfect balance between genocidal annihilation and individualized slow painful crushing destruction. Additionally, the raw and chaotic production that Revenge utilized on much of their earlier work has been wisely expanded upon just enough to reveal the full spectrum of the instrumentation. While maintaining a very strict dedication to the original sound, aesthetic and structure that has been the foundation of the band since the very beginning. These strategic adaptations have made the songs even more potent and to the point.
The elite, strengthen themselves, and leave the weak behind, and this is precisely the approach that Revenge has taken with this new release. As usual, Revenge’s sound is caustic with the obsessive fury of J. Read’s insane percussive assault and rabid, spiteful vocals. While long time session member Vermin offers a thick and grinding guitar and bass attack beyond anything heard on the bands previous albums.
Consumed with contempt, Revenge continue to press forward walking alone above the weak scum with absolute disregard for all who question their approach. This militant doctrine defines all of Revenge’s work, but it is most prominent on this, their fourth album. All unnecessary elements have been stripped and discarded leaving only the most effective weapons in the Revenge arsenal with which to continue down the supremacist path of undying intolerance for the swine known as mankind.

“ The scam has come undone. Move on it or step aside. Take your place at the back of the line. When it’s time to move equalization begins. Behold forced correction.”