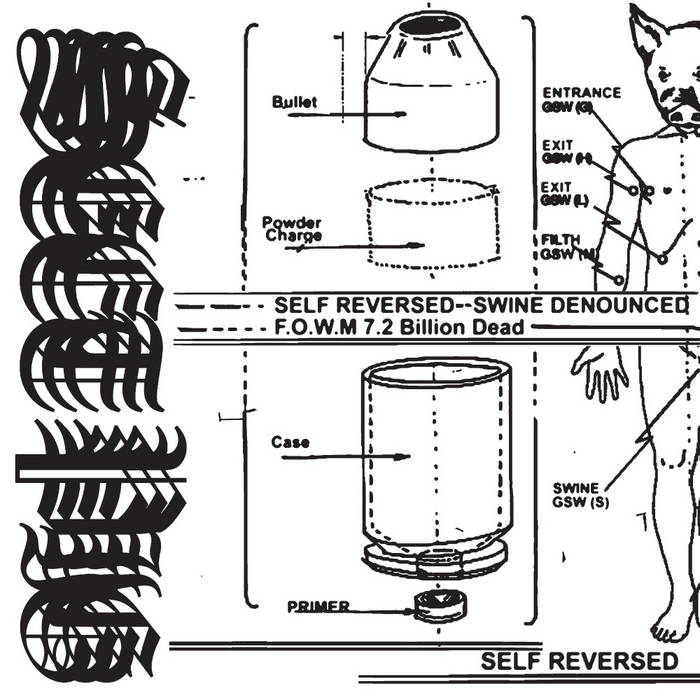 With its second MLP entitled “Self Reversed,” the enigmatic entity known as Sect Pig continues in the same depraved vein that it initially tapped with “Slave Destroyed,” their first MLP, also released by Nuclear War Now! in 2013. In the same way that the band had previously established itself on its first recording, “Self Reversed” might best be characterized musically as a manic descent into hypnotic psychosis. Although the song structures and rhythmic patterns hint strongly at the early Von demos as a primary inspiration, Sect Pig's compositions involve more layered textures, atmospheres, and variety of effects, and thus they are more complex than what Von undertook with its brand of minimalist black metal. Additionally, Sect Pig once again skillfully employs the use of spoken-word monologue samples to frame the most primal of themes that the music explores. Among these samples are references to self-mutilation and the detached indifference to one's own life or death, the confessed motivations of a serial killer bent on the destruction of sexual icons, and an academically-rendered profile of such a serial killer. Furthermore, and as a continuance of what is likely to be considered Sect Pig's most easily identifiable trait, the presence of bestial, effect-laden vocals, reminiscent of a human/swine hybrid, might be justifiably interpreted as a reflection on a dehumanized society and the thinly-veiled boundary that one might easily cross into animalistic depravity.