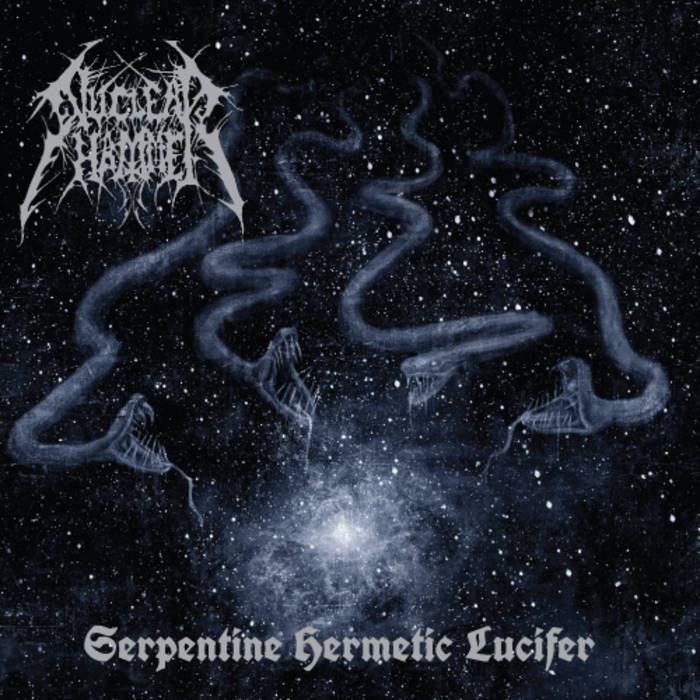 For nearly ten years, the Toronto-based band Nuclearhammer has endeavored to refine and perfect its aural strategy. A succession of demos and EPs served as a preface to the bestial emanations featured on its 2009 debut album, “Obliteration Ritual.” Though it is a superb release in its own right, the debut album and the myriad EPs that followed appear, in retrospect, as stepping-stones to the band’s full realization of its own potential, which it has attained on its new album, “Serpentine Hermetic Lucifer.” It is with tremendous pride that NWN! presents Nuclearhammer’s most potent manifestation to date. The album opens with a sprawling nine-minute track of atmospheric bestiality—the persistent and repetitive nature of which immediately casts a disorienting, hypnotic shroud upon the listener before culminating in a swirling and surreal display of the variegated hues of cataclysmic Luciferian splendor. Filling the interstitial spaces between the band’s hypnotic and opaque deathscapes are otherworldly electronic drone interludes punctuated by convulsive outbursts of Death/Grind violence such that the entire album dilates and contracts with cosmic grandeur. The resulting sound evinces an extreme sense of intentionality and control. Adding to the band’s willed and focused approach is the degree of care and precision that went into the recording and production of the album. The band utilized a vast array of meticulously selected gear for the performance and recording of “Serpentine Hermetic Lucifer.” Committed to RMGI 911 tape using a Tascam 38 1/2" 8 track deck, the album exudes the rich fullness of analog recording. To maintain that exquisite sound, the reels were sent directly to the pressing plant so as to avoid digitization in the manufacturing process. No detail was left untended in the writing, recording, and pressing of this album. Nuclearhammer’s magisterial delivery and the breadth of sonic territory traversed on “Serpentine Hermetic Lucifer” ensure that this album will solidify the band’s presence and influence for years to come.