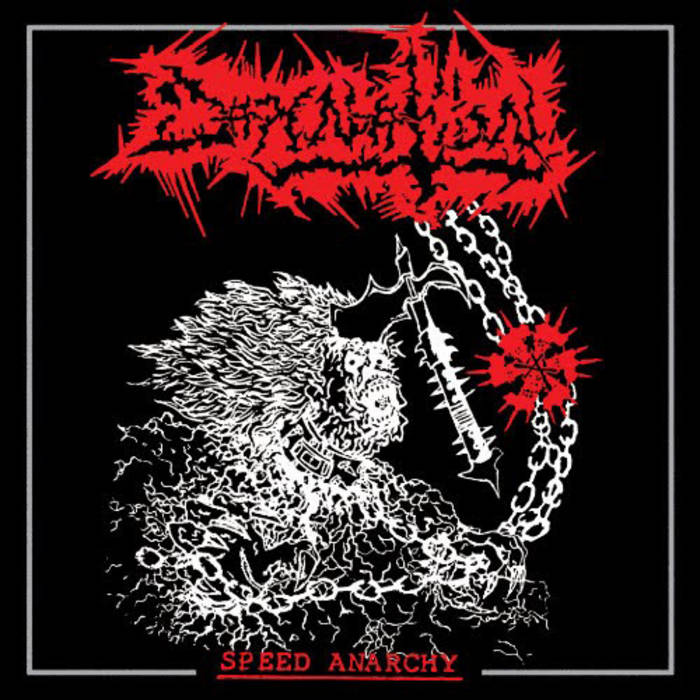 Damnation emerged in the mid-1980’s Canadian Speed/Death Metal scene and released a series of four demos between 1986 and 1992. The band occupied that unique space that developed during the time period in which Death Metal was just beginning to evolve out of the Thrash/Speed metal style. The first two demos (which are collected on this reissue), “Speed Anarchy” and “Aggressive Repulsive Symphony” represent Death Metal in its earliest and most grotesque stage of development. For reference points, one should look to the seminal early recordings of bands such as Slaughter, Death, and Necrophagia. The songs on these two demos are frenzied blasts of violence generally clocking in at less than two minutes in length and carry the inherent power of simplicity that characterizes so much of the classic Thrash and Hardcore recordings from the era. Unlike that music, however, the end result is not simplistic and angst-fueled Thrash, but is instead intensely hateful Death Metal. Although their output was limited, the band’s influence was immense. Mayhem’s vocalist, Dead, was fascinated with Damnation’s sound and even bands as highly regarded as Nifelheim have lifted riffs and vocal delivery patterns from them. The production quality of these demo recordings is also incomparable. The guitars are thick and laden with a brittle distortion that punctuates rather than obscures the authority of the riffs themselves. The drums are stark and vengeful and the vocals add a demonic character to the entire work. The interaction of all of the parts is neither incompetent nor overly technical. The band walks the line between these two realms playing in a way that is at once powerful, earnest, and imperfect. For those who have long been familiar with Damnation’s earliest work, this reissue merely provides a definitive presentation of these two demos and a chance to revisit their volatile and destructive force. For those who have never been afforded the opportunity to indulge in these recordings, you will undoubtedly find yourself immediately at the mercy of these manifestations of horrific carnage.