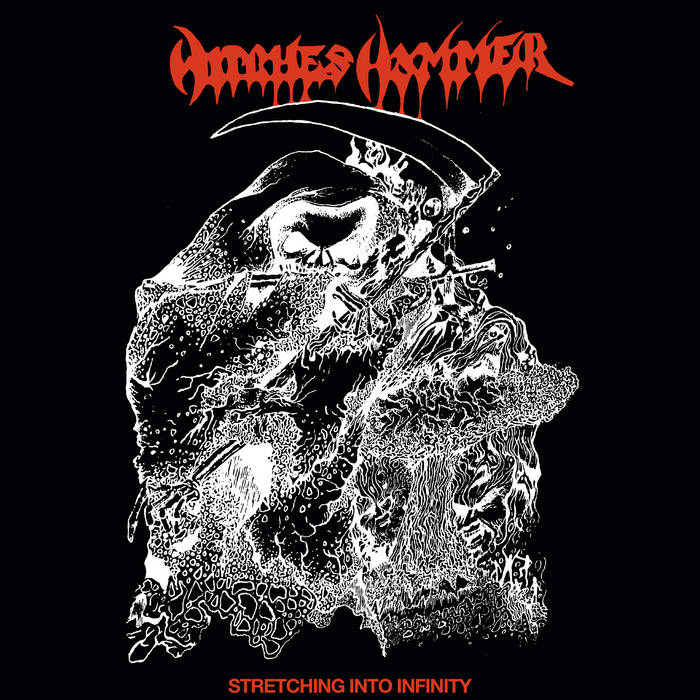 While toiling in the relative obscurity of an underground scene in British Colombia as its first extreme metal band, Witches Hammer self-produced two demos of evil speed metal in the mid-1980s. Following the second demo, a local label by the name of Subversive Productions offered to release a Witches Hammer 7” EP. The band suggested that a 12” EP would be a better format for both improved audio and visual impact, and the label agreed to the request. In 1987 (that same year), Subversive released the record, packaged in a plain white jacket with the photocopied layout glued to front and back, featuring the artwork of Dax Howell. Unlike the previous demos, which had been recorded with sole guitarist Marco Banco, the band had recruited a second guitarist in Mike E. Death for the 12” EP. This addition allowed for a more complete sound since it more readily facilitated both rhythm and lead guitar tracks, the combination of which was not present on the demos. Estimates of the number of copies pressed range from 1500 to 5000, but a house fire in the 1990s destroyed the remaining 500 unsold copies. Following this record’s release, the band continued to play local live shows mostly in support of touring acts, in addition to a brief tour across western Canada. During this time, Witches Hammer gained some exposure and was noticed by, among others, Black Winds from the notorious Blasphemy cult, who later cited the band as a primary inspiration. In 1988, Witches Hammer returned to the studio to record what it had planned to be its debut full-length album. A total of twelve tracks were recorded, including nine tracks that had been previously recorded for prior releases and three brand-new songs – “Inner Sanctum,” Stretching into Infinity,” and “Captain Breakdown” – which collectively were indicative of the band’s continued progression. As with the preceding 12” EP, the band once again summoned Dax Howell to provide the cover art, which was also used for a t-shirt design. As fate would have it, however, the album was never released as originally intended, and these would prove to be the last songs recorded before the band members went their separate ways over the next couple of years. Fortunately, Nuclear War Now! unearthed the tracks from the unreleased album and released them along with those from the 12” EP in a collection entitled “Stretching into Infinity” in 2005. Thirteen years later, NWN! is proud to offer a repress of this compilation, once again on 12” vinyl format. Whereas the earlier demos collected on “Canadian Speed Metal” offer a glimpse into the early days of a band once described by Pushead as a “speeded-up Venom,” these subsequent recordings showcase a fully-matured Witches Hammer that harnessed the evil of proto-black metal bands like Sodom and infused it with a heavy dose of unhinged aggression, similar to that of the local hardcore bands it regularly gigged with in the area. In 2018, this sound is as potent as ever and quite worthy of the recognition it never fully received outside of the Vancouver area in the band’s heyday.