The Agent that Shapes the Desert 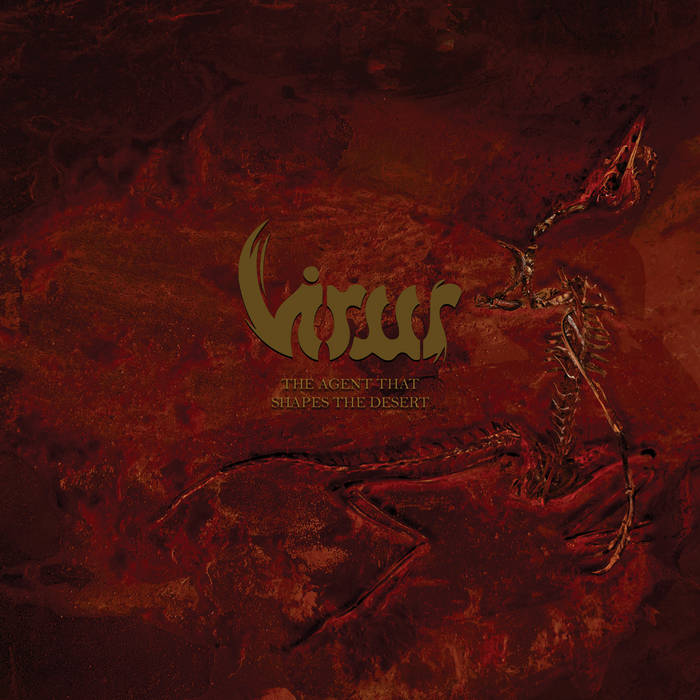 In conspiracy with Duplicate Records, Nuclear War Now! is honored to announce the reissuing of the first three Virus (Norway) albums, “Carheart,” “The Black Flux,” and “The Agent that Shapes the Desert,” on vinyl LP format. As a somewhat distant but still closely musically-related descendent of Ved Buens Ende, the music of Virus bears a somewhat more striking similarity to “Nothingface”-era Voivod than it does its black metal antecedent. With its generous reliance on an almost mechanized sequencing of dissonant chords and riffs, in confluence with a predominantly bass-driven backdrop, Virus draws an unmistakable influence from Voivod’s more experimental, post-thrash period. At the same time, these recordings exude a darkness that also resembles the prominent involvement of the band’s mastermind, Czral, in Ved Buens Ende, whose vision of black metal already contained traces of a genre-breaking evolution in the mid-1990s. The combination of these influences results in a series of recordings that straddle the boundary between second-wave black metal and one of its early offshoots. In deference to Duplicate Records, the band’s own label, the following descriptions of each album are offered:

CARHEART
The outlandish threesome's debut, originally released on CD by Jester Records in 2003, and later on vinyl by Duplicate in 2009, remains a fan favorite with its unheard of mixture of Czral's trademark dissonant riffs and alien vocals, Plenum's rollercoaster-gone-bad bass excursions and Einz' infectious grooves. All is seasoned with a healthy dose of Monty Python'esque imagery and absurd darkness.

THE BLACK FLUX
“The Black Flux” was the catharsis of Carl-Michael “Czral” Eide as an artist, writer and performer and it represents a watershed in the field of avantgarde metal / rock. Hailed as “album of the year” in several publications, the album saw the band rise from curious underdogs to recognized innovators. Taking the eccentric guitar disharmonics of Ved Buens Ende beyond a dense maelstrom of sound and placing it within a surprisingly “rock” format, albeit never losing touch with the alien accents of the band’s “Carheart” debut, “The Black Flux” is the sound of an organism coming of age and understanding its purpose.

THE AGENT THAT SHAPES THE DESERT
“The Agent That Shapes The Desert” is the third album from Norwegian avantgarde rock maestros, Virus. Whereas its predecessor, “The Black Flux,” was a dense maelstrom that threatened to pull you under, “The Agent...” is dry, sharp, and refined. It combines the dissonant guitar-washes of mastermind Czral's former band Ved Buens Ende and “The Black Flux” with the outlandish nature of the band's “Carheart” debut, while simultaneously moving in several new directions at once. At the same time, “The Agent...” is the band's most coherent, catchy, and well-produced effort yet, and should appeal to music addicts across a vast spectrum of genres. Czral's trademark sideways riffs are perfectly underscored by the concise, efficient drumming of Einz and Bjeima's adventurous bass lines. The vocals, also courtesy of Czral, are stronger than ever, at times reminiscent of a choir of mad preachers, at others subtle and brooding, giving off an air of desperation.