The Last Sodomy of Mary 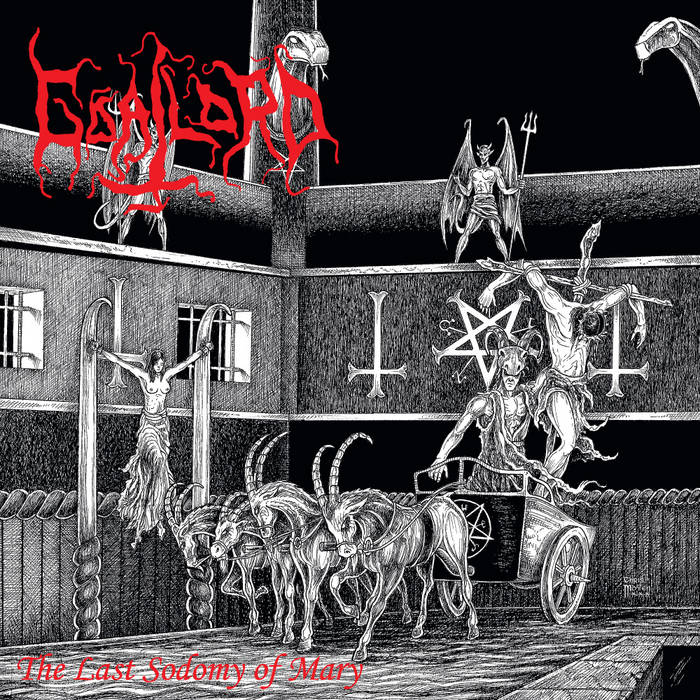 After Goatlord agreed with JL America to release a second version of their 1991 debut album, “Reflections of the Solstice” (but this time simply renamed “Goatlord”), the band recruited vocalist Chris Gans to permanently replace Ace Still, who had left prior to the recording of the album but resurfaced briefly to record vocal tracks for it. Thus, with a new member and a U.S.-based label that agreed to finance such a venture, Goatlord set out with new labelmates Excruciating Pain to tour the west coast of the United States. Though they had previously been limited to playing makeshift local gigs in the desert, using gasoline-powered generators for electricity, this tour undoubtedly began to earn them some well-deserved recognition in five different states, which culminated in a set in front of an audience of a thousand at the Death Metal Fest in Hollywood. This increased exposure, however, turned out not to be the necessary element that would solidify the new lineup and encourage them to record a second album. Instead, the band returned from this tour with a lack of motivation to forge ahead, and the band dissolved shortly thereafter in 1992.

Prior to their disbandment following the fateful west coast tour, Goatlord had begun writing and rehearsing new material that was intended to serve as the foundation for a follow-up to their debut album. Seven of these tracks were recorded at different stages of their development and serve to document the final chapter of the band's history. These recordings clearly demonstrate the band's intention to return more to the sound that was present on their first recording, “Demo '87.” Tempos on newer songs such as “Gargoyle King” and “Strange Burial” range from mid- to fast-paced, and gone are the nine-minute-plus, doom-laden passages that were displayed prominently on the “Sodomize the Goat” demo and, to a somewhat lesser extent, on “Reflections of the Solstice” (aka “Goatlord”). The other unmistakeable difference is in the vocals, which were executed quite competently by Gans, but in a noticeably different style than those of Still, his predecessor who had been instrumental in establishing the trademark Goatlord sound. Another novelty and notable difference with previously-written songs was guitarist Joe Frankulin's first foray into the writing of lyrics for “Stygian Void.”

As it first did in 2007, Nuclear War Now! is once again honored to re-release “The Last Sodomy of Mary,” a collection of both the earliest and last of the band's recordings, some of which were still in need of lyrics being written. In addition to the seven aforementioned songs that were intended to be included on a second album, this compilation includes the band's first-ever recording, “Unholy Black Slut,” the same version of which was played by a friend on his radio show at a local university soon after the band's inception. It also contains the first recorded version of “Sacrifice,” one of the band's longest-tenured and most highly-revered songs, as it was first committed to tape with Glen Bonner from Doom Snake Cult on guitar. In sum, “The Last Sodomy of Mary” represents both the first and final nails in the coffin of a band's whose undead presence will forever outlast its short-lived active existence.