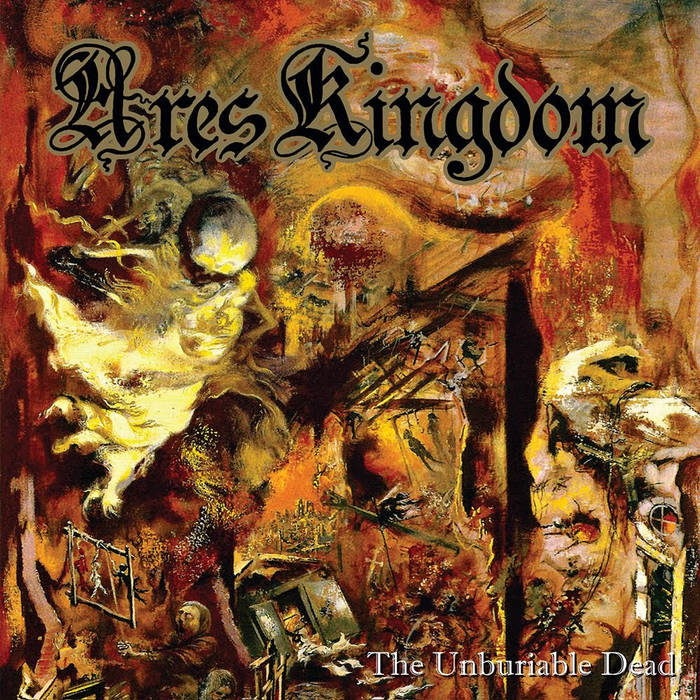 Following the release of their monumental second full-length album, “Incendiary,” in 2010, Ares Kingdom took a well-deserved break from recording new material in order to pay homage to some of their primary musical inspirations with the 2013 release of “Veneration,” a collection of various cover songs from the likes Slaughter Lord, R.U. Dead, Sacrilege, Mefisto, and others. The recording of “Veneration” was also seen by the band as an opportunity to experiment with different recording techniques that had not been previously implemented on their earlier original recordings. With an evolved sound that resulted from these sessions, Ares Kingdom then refocused their attention on the writing, rehearsing, and recording of new original material, which has now culminated in their third full-length offering, “The Unburiable Dead,” an album which confirms that the best musical product results from patient and diligent attention to detail.

With much of its musical pedigree having originated and developed from its members’ direct and indirect connections to the legendary Order From Chaos, Ares Kingdom has once again demonstrated its uncanny ability to successfully intertwine exceptional songwriting and musicianship with superior thematic and lyrical content. As with their prior releases, the seven tracks on “The Unburiable Dead” are relentless, scorching examples of metal fire and blood influenced not singularly from one, but instead from several sub-categories of black/death/thrash metal. Thematically, the lyrics examine and reflect the world-shattering conflagration of the Great War for Civilisation (1914-1918) in brutally stark and agonizing, but equally artful terms. With the opening track, “Ubique” (Latin for “everywhere” and the motto of Britain’s Royal Artillery), the album traces the origins of the war before moving on to reflect the naïve optimism of the war’s early combatants with “Nom de Guerre” and the breakdown of the original ‘war of movement’ into the deadly stalemate and attrition of fortifications and trenches with “Salient and Redoubt.” The fourth track, “Demoralize,” reflects the waste and futility endured by both sides, which is followed by “Writhe: Fettered to a Corpse,” the album’s lone instrumental track with its title derived from a Hindenburg-attributed quote. The final two tracks, “The Unburiable Dead” and “Stultifera Navis (Armistice and League),” recount the final stages of the war, first from the soldier’s entrenched point of view as it lurches to an end, and then with the outbreak of joy and relief on the homefront upon its conclusion, which was ironically followed by the disastrous peace process that ensued.

Nuclear War Now! is proud to conspire again with Ares Kingdom in the release of “The Unburiable Dead” on both LP and CD formats. The artwork appropriately chosen to adorn all versions features “The Pit” by ‘degenerate artist’ George Grosz (1893-1959), whose despair over the destruction, terror, and death that nationalism had brought to his country through this conflict is readily apparent. Other powerful artwork and photographs present in the 12-page CD and 8-page gatefold LP booklets serve as illuminative thematic backdrops for the lyrics featured on each page and include works by American artist Marsden Hartley (1877-1943), British artist Christopher R.W. Nevinson (1889-1946), German artist Otto Engelhardt-Kyffhäuser (1884-1965), and French artist Georges Le Roux (1877-1957). All LP versions also include an A2 poster, and the die-hard edition boasts an additional Ares Kingdom poster flag and sticker.