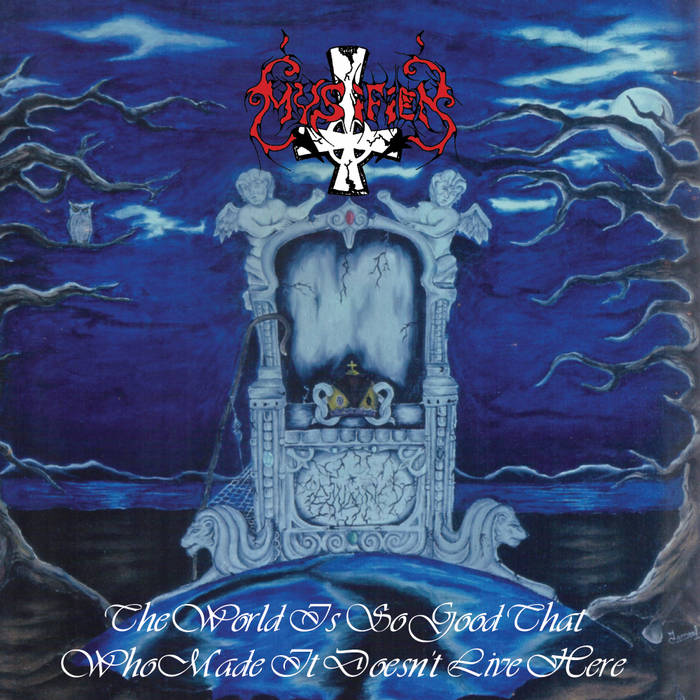 Between 1989 and 1993, Mystifier released a rapid succession of definitive recordings that established the band as one of the most important to emerge from the Brazilian underground Black and Death Metal scene. After the release of the band’s 1993 masterpiece “Goetia,” Mystifier disappeared for the next three years. The band resurfaced in 1996 with a thoroughly unpredictable album with the absurdly long title, “The World is So Good That Who Made It Doesn’t Live Here.” Mystifier’s third album represented a marked departure. Although the traditional Brazilian Black/Death sound was present, the album is far more theatrical and the production substantially cleaner than the band’s earlier work. With “The World is So Good…,” Mystifier embraced a technical approach that departed from the brutal primitivism for which early Brazilian metal is known. While Mystifier utilized keyboards on their previous albums, they are more pronounced on “The World is So Good…,” often directing the course of the music. The songwriting is complex with all of the songs taking on more of an epic dimension than on prior recordings. Multi-tracked instrumentation, atmospheric keyboards, melodic riffs, occasional acoustic guitar, and intricate leads and solos are featured prominently on the album. The most notably peculiar augmentation to Mystifier’s sound on “The World Is So Good…” is indisputably the inclusion of operatic vocals throughout the album. Mystifier’s decision to deviate so heavily from their prior sound and from the norm of underground metal was all the more admirable because it took place at a time when few bands felt comfortable exploring such uncharted territory within Black Metal. The inherent eccentricity of “The World Is So Good…” rivals that of former Osmose labelmates, Masters Hammer. This album reflects an era when the rules of Black Metal were not so rigid and many bands strove to find new territory to explore as opposed to rehashing old sounds. While Mystifier’s earlier material was undoubtedly genre defining, “The World Is So Good…” operates outside of any specific style and, as such, represents a monumental step in the Mystifier catalog. The idea to issue the first-ever vinyl release of this album arose during discussions in Berlin following Mystifier’s phenomenal performance at NWN! Fest II. NWN!, Iron Bonehead, and Ordo MCM are proud to present this LP reissue of Mystifier’s classic third album.

"Demolish the Towers of Heaven"
Recorded at Vertice Estudio in 2005
Engineered by Jera y Beelzeebubth
Originally recorded as bonus track for a reissue.

If you like The World Is So Good That Who Made It Doesn't Live Here, you may also like: