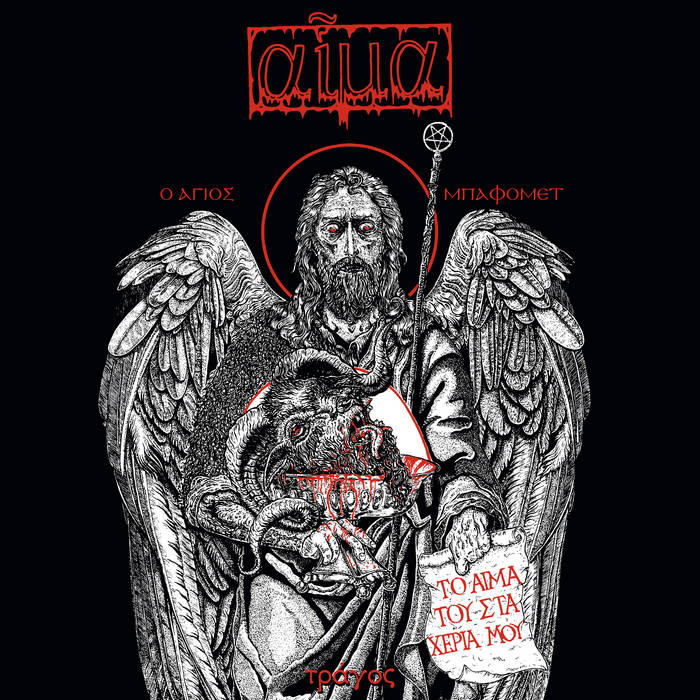 Nuclear War Now! is proud to announce its newfound alliance with Αιμα (Aima) in releasing the band’s debut album, "τράγος" (“Tragos”). Although it was established in Athens, Greece in 2011, Aima has to this point not garnered a level of attention that is commensurate with the quality of its music. This is almost certainly due to the fact that its recorded output to date has been somewhat sparse, and that it has opted not to play live shows. Additionally, its members have been simultaneously involved in other cults of similarly irreverent purposes, such as Wargoat and Goat Synagogue, whose endeavors have also occupied their attention. With the release of “Tragos” (“Goat”), however, Aima is poised to make its formidable presence known on a much wider scale. The Greek moniker Αιμα, or “blood,” appropriately distills the band’s essence into the basic element of life and death. Similarly, and in a practice continued with this album, each of Aima’s previous solo releases, including its 2012 self-titled demo and ensuing 7” EP from 2014, "σάρκα" (“flesh”), has been branded unassumingly, allowing instead for the recording itself to deliver its potent message in greater splendor. Since the beginning, and continuing through the aforementioned releases and the more recent 2017 split with Supremative, the goal has been to continue the tradition of black metal first espoused by pioneers like Sarcófago, Beherit, and Blasphemy. Like these bands, Aima has infused a healthy dose of death metal influence into its craft, resulting in a sound that is not unlike that of its fellow Greek contemporaries and long-time NWN! stalwarts, Embrace of Thorns. This parallel is also exemplified by the fact that the "σάρκα" EP was released on Archfiend Devilpig’s own Kill Yourself Productions, which serves as a testament to their mutual admiration. By Aima’s own admission, “Tragos” accentuates the death metal element even more so than previous releases. This shift was not made by conscious decision, but instead represents a natural progression in the band’s style. All eight tracks on the album were written in 2017 and 2018, subsequent to the release of the split with Supremative, which lends the recording a notable cohesion in its devastating, monolithic effect. Finally, credit is due to sound engineer Sotiris Laskaris, who was responsible for the production, mixing, and mastering that perfectly enhances this voluminous recording, a feat even more impressive considering it was captured in the band’s rehearsal room. With “Tragos,” Aima has clearly established itself as a worthy present-day torchbearer in the tradition of the most blasphemous of dark arts.