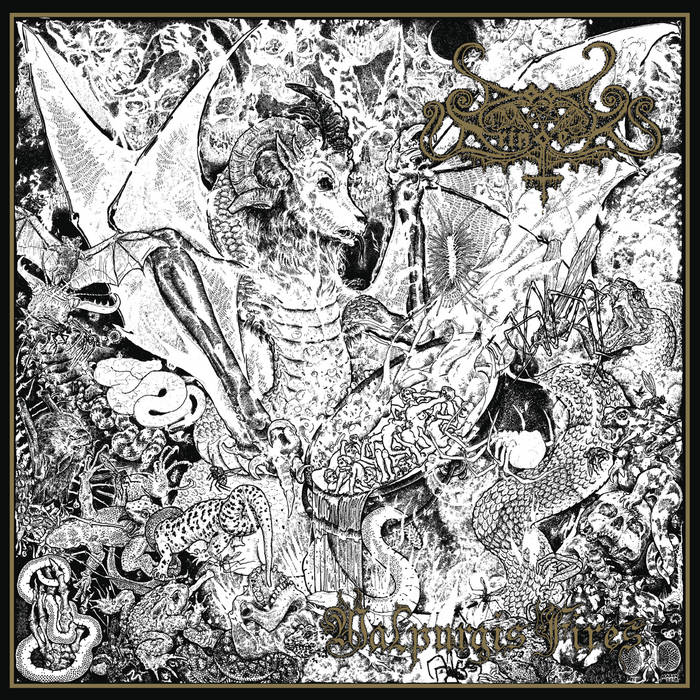 For over a decade, Poland’s Doombringer has consistently produced a hybrid strain of extreme sound: the stalwart machinery of death metal adorned in the opaque cloth of black metal. With only two demos and a few EP tracks foreshadowing its debut album, the band’s sparse discography is a testament to the meticulous curation of its body of work. It has now been nearly five years since Doombringer released its first full-length, The Grand Sabbath, and the band’s second album, Walpurgis Fires, demonstrates its substantial progress while retaining the band’s notable traits. Perhaps the most exceptional element of Doombringer’s sound is its sheer unpredictability—the failure to adhere to a particular formula. Tempos shift suddenly, melodies dissolve and coalesce, and the vocals vary wildly across a broad spectrum of styles. Notwithstanding the diversity of tools in Doombringer’s arsenal, the end result is integrated and unified. As is customary for the band, Doombringer wrote Walpurgis Fires over an extended period of time between the fall of 2017 and the spring of 2018. The dedication to composition is obvious; the songs are complex, unique, and all flow seamlessly together as an album. The lyrics, laden with occult inspiration and influence, were written in tandem with the music in correlation with the atmosphere evoked by the instrumentation. Conceptually, Doombringer draws influence from medieval literary and artistic depictions of the witches Sabbath, and, as with the band’s prior releases, the influence of Polish folklore and music is also always present, in both the lyrics and the music—the ancient feeling interwoven with, and superimposed upon, the nightmarish horror of the present. Following that extended period of composition and perfection of the songs, Doombringer recorded the album in late 2018 at the band’s Black Lodge studio in Poland, and later added lead guitars at Fireball Studios in Greece. Haunted with visions inspired by the recording, Marko Marov, a visual artist with whom the band has a long-standing relationship (he is responsible for most of the artwork featured on Doombringer’s recent releases), masterfully illustrated and designed the jacket. Walpurgis Fires is a monumental work, the culmination of everything the band has done up to this point and an ominous vision of the darkness the band will continue to summon forth.