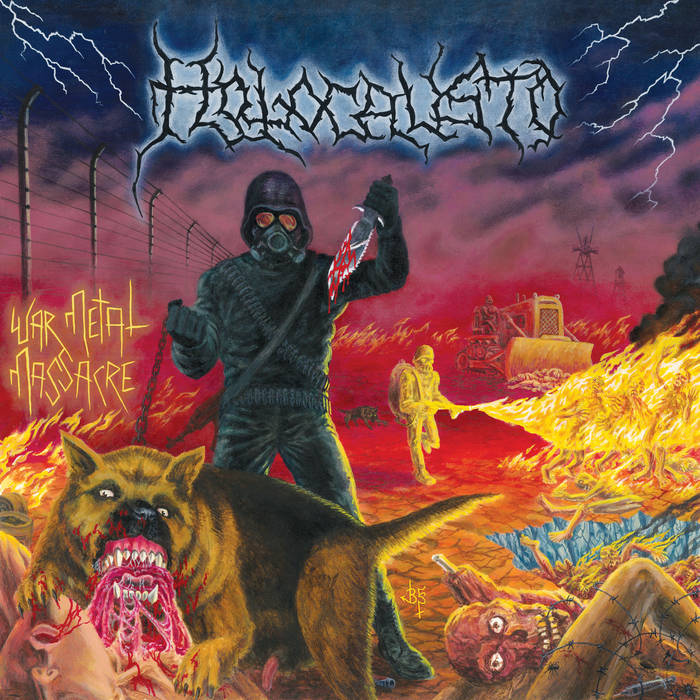 It is extremely rare that a band is able to recapture a sound that it first established over thirty years ago but then lost in the process of its evolution on later recordings. With its original lineup in the mid-1980s, Holocausto was instrumental in the development of the unique strain of black metal that emerged from the Minas Gerais region of Brazil at that time. Known as the original “deathcore” to the most seasoned veterans of that scene and those who have come to understand it from a historical perspective, this variety of metal shares nothing in common with the abomination that the term has come to more typically represent in the present day. Instead, it is the savage brand of black metal, primarily popularized by the infamous Sarcófago, which repeatedly pushes itself to the brink of total musical disintegration before somehow managing to resist its own self-annihilation.

Holocausto’s role in the emergence of Brazilian deathcore notwithstanding, the band largely abandoned this sound following the release of its incomparable debut album, “Campo de Exterminio,” in 1987. What followed was a period of many years of experimentation with a more standard variety of thrash metal over the course of four subsequent albums. Regardless of whatever reasons may have led to this stylistic mutation, the chaotic violence of their earlier songwriting and performance was effectively condemned to a state of dormancy that few would have predicted to ever reemerge.

Now, three decades after the release of the essential “Warfare Noise” compilation, on which the band contributed two of its earliest songs, Holocausto triumphantly returns to its earlier pioneering sound with its original lineup of Rodrigo Fuhrer (vocals), Valério Exterminator (guitars), Anderson Guerrilheiro (bass and vocals), and Nedson Warfare (drums). Nuclear War Now! is honored to have been chosen to play an integral role in Holocausto’s resurrection, with this release of “War Metal Massacre,” the band’s sixth album, but only the first since its debut to follow in the Minas Gerais deathcore tradition. Although it is short by modern standards, this album overcompensates in intensity for what it lacks in length, delivering one of the most remarkable and authentic recordings of a reunited metal band in memory. The first three songs, which comprise Side A of the LP version, are re-recordings of the “Massacre” demo track from 1985 and the two tracks first committed to tape on the “Warfare Noise” compilation from 1986. A quick comparison between one of these reinterpreted songs and its original version immediately verifies the band’s return to its roots. Even more importantly, the three new songs on the album confirm Holocausto’s ability to have recaptured its original, feral songwriting capacity. Immediately following the ominous air raid sirens of the intro to Side B, “Eu Sou a Guerra” launches into the same unbridled havoc that characterized their early recordings and one which reflects the orchestrated chaos of true warfare. This aural fury, which appropriately earns the band’s sound the often-misplaced moniker of “war metal,” continues throughout the remainder of the album, a fact which is certain to please the strictest conservationists of old Brazilian black metal. In short, “War Metal Massacre” heralds the second-coming of a band and sound that until now had been expected to exist only as a relic of the past.

Recorded, mixed and mastered by Andrevil and Holocausto at Engenho Studio, BH, Brazil in June 2016.

All musics and lyrics by Holocausto.